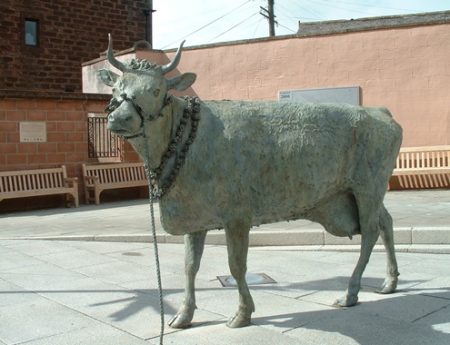 An outstanding piece of public art has been nominated for an Aberdeenshire Design Award.

The Turra Coo has stood in the town centre of Turriff since 2010, when a 1,000 strong crowd, including Scotland’s First Minister Alex Salmond, turned out to see the unveiling of the bronze cow statue. Speaking on the day, Aberdeenshire Council Provost, Bill Howatson, said: “This is what public art is all about, helping to raise the profile of the town’s heritage and its culture, and the community should benefit from it.”

The statue was commissioned by the Turriff Tourism Action Group to commemorate the story of the famous Turra Coo. In 1913 the Liberal Chancellor Lloyd George championed the new National Insurance Act, which made health insurance payments compulsory for workers. However, farmers claimed that the level of payment for their farmhands was too high as they couldn’t take days off like industry workers, and country folk were healthier than those from the city.

One of those who refused to pay was famer Robert Paterson, who was fined as a result. The sheriff took a cow off him to repay his debt to the government and tried to sell it in Turriff, causing a huge riot. The sheriff’s office was pelted with rotten fruit and the cow was eventually taken to Aberdeen to be sold, upon which point a group of local farmers bought her and brought her back home to Turriff.

The cow has since become a symbol of power in the farming community, and the Turriff Tourism Action Group therefore commissioned the public art to commemorate the famous cow. Artist and lecturer David Blyth won the commission to make the statue, along with artists Charles Engebretson and Virginia Hutchison.

“The original commission was for some kind of memorial or public monument to commemorate the story of the famous Turra Coo. The committee received proposals from all over the world, but our approach was quite different – which I think is why we won. We have produced a very traditional bronze statue of a cow, but with a twist. 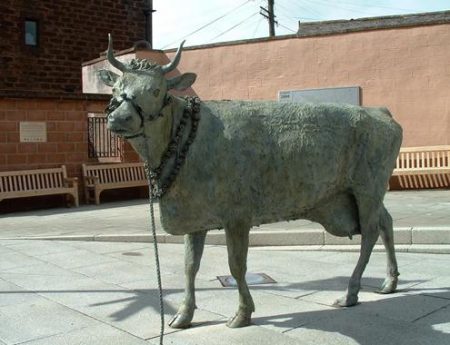 “We took the archive photographs of the original Turra Coo from 1913 and put out a public advert looking for a look-a-like living cow. In 2009, we found our cow. She was about to go to slaughter so we bought her and she spent her last Christmas with her young calf. In February 2010, we had the cow put down by a qualified vet and then we preserved her using taxidermy before finally casting the stuffed cow in bronze. This has in turn created a really lifelike, realistic representation of the cow – which is quite tremendous.

“The key thing was that we didn’t apply for the commission to win the cash and make the sculpture. I wanted to make a real piece of contemporary art work, and the TurraCoo is very much integral to my ongoing artistic practise. This is very important to me. I’ve never stuffed an animal that size before, and it was a really big undertaking for the three of us. It’s not just a token memorial statue – I see it as a true piece of fine art.”

The Aberdeenshire Design Awards ceremony will be held in September 2012.