The regeneration of Loampit Vale in Lewisham has led to more awards for Barratt Homes.

The Renaissance development comprises the construction of 778 flats within eight buildings ranging in height from nine to 25 storeys. There will also be a leisure centre, which includes two pools, fitness suite, a climbing wall Dance Studio and spa, together with a cafe; there will also be a series of commercial units and community facilities including a new venue for the Lewisham City Mission.

Working with Barratt on the design of the residential buildings is architect Assael.

Located opposite Lewisham Station in South East London, the project began in April 2010 and is due to finish at the end of 2016.

“As part of the development we have built an energy centre which feeds the 788 flats, the swimming pool, leisure centre and the new school that has been built nearby and that reopened in September. 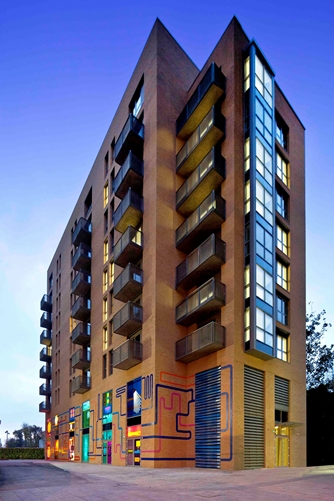 “The buildings are all concrete framed and mostly brick clad with block G lower tower clad in panelling whilst the main tower is completely encased in glass, then we have roof gardens with trees and plants in them on the 9th, 13th and 25th floors.”

The Renaissance development also includes many energy saving features which will reduce potential carbon emissions by 44%, helping to make it one of the first mixed-use developments in the UK to reach Code 4 of the Code for Sustainable Homes together with 11 town houses constructed to code 6.

“I found out about the Seal of Excellence in September and was really pleased.  I’ve always worked for contractors who don’t deal with the NHBC.  I’ve worked on hospitals, schools, MOD establishments and the refurbishment of The Royal Festival Hall, but this is my first foray into development.”

The contract we have with London Borough of Lewisham, our partner in the scheme, meant that Barratt Homes wanted more than just a house builder, which is why I was asked by Barratt to come and work on this project.

“We’re all very pleased on site about the awards. In terms of the Health and Safety Award, the best bit has been that we’ve only had one accident on site – in September 2010 – which wasn’t serious. Since then we’ve completed 1.6 million man hours without any accidents at all. We’ve had over 400 men on the site and from our point of view we want them to go home in exactly the same state that they come to work in.”

Specialising in the design and build of leisure facilities, Pellikaan are a construction company that have been working in the UK since 1984.

The company was originally founded in 1947 in Holland and currently undertakes construction work across Northern Europe.

Most recently the company were one of the main sub contractors on the Renaissance Development, which saw Loampit Vale in Lewisham receive an award winning regeneration. Pellikaan designed and are currently building the leisure centre at the facility.

As an experienced and unique company, Pellikaan look to work closely with clients in order achieve the best results. The company brings together technologies, trends and innovations from different countries in each tailor-made project.