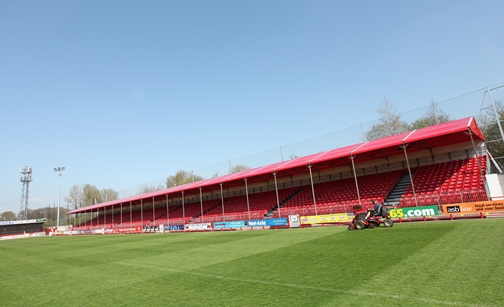 In the planning for a year and costing £1million, Crawley Town FC unveiled the latest addition to their Broadfield Stadium last April when they opened their East Stand.

The impressive new East Stand contains 2,154 seats and has increased the stadium capacity from just under 5,000 to nearly 6,000 to meet Football League guidelines.

The project was funded 50/50 by the club and a grant from the Football Foundation and with increased gates it is expected to pay for itself quite quickly.

Alan Williams, who managed the project during his time as the club’s Chief Executive, said the development was a thank you to the fans for years of loyal support.

He said: “The Broadfield Stadium now looks like a stadium, not just a three-sided stadium with a wall, which wasn’t pretty. That had been the case since the Stadium opened in 1997.

“We are sorry the fans have lost the terrace where many have stood in for the last 15 years but hopefully we have given them something a lot better to sit in for the next 15 years. This is a thank you to the fans for their wonderful support.

“It’s a massive project I worked on on from the second we knew we won promotion at Tamworth in April 2011 to the League. It ticks so many boxes and means we now have a capacity which complies with Football League regulations.”

The Reds are currently sitting mid table in League One and Alan hopes that the ground improvements combined with good league form will see an increase in the numbers of supporters using the GFS East Stand, which was re-named last September following a sponsorship agreement with the club’s main backers GFS. 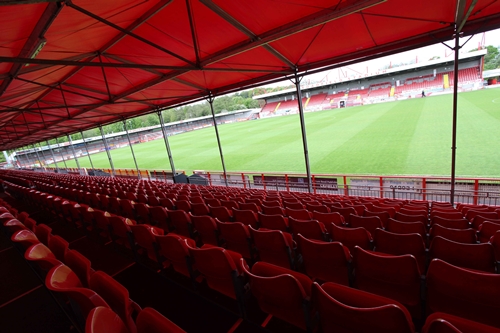 He added: “The new stand has made the match-day atmosphere fantastic. We want to encourage as many people as possible to come and support us and that means having good facilities for them.”

The club have gone from strength to strength in recent years, winning back to back promotions from the Football Conference to League One in successive seasons.

And they believe the GFS East Stand is another sign of their intentions to keep trying to push on and achieve more success on and off the field.

The practice of Douglas J P Edwards, Chartered Building Surveyors, has been established since 1982 and employs both Architects and Surveyors to work on a very diverse range of projects, mainly in the South-East of England.

These include commercial and private leisure buildings, care and sheltered accommodation, blocks of flats/apartments, industrial units, new houses for private clients and small scale residential developments, works to private schools and the conversion/ alteration/ extension of all types of modern and ancient, residential and commercial premises, including barns and mill houses.  Many of the buildings are of Listed Building status.  Extensive works have been carried out to hotels, sports facilities, licenced premises, commercial kitchens, equestrian facilities, office units, change of use schemes, swimming pools, crematoria etc.

The very varied services offered include conceptual design, the preparation of Planning and Building Regulations applications, constructional drawings and specifications for tendering and building purposes and contract administration of projects.

Douglas J P Edwards is grateful and delighted to be involved with Crawley Town Football Club and to see the success which it has achieved over the last few years.  The practice looks forward to continuing to work with the Football Club as it maintains its rise in prominence in the Football League.