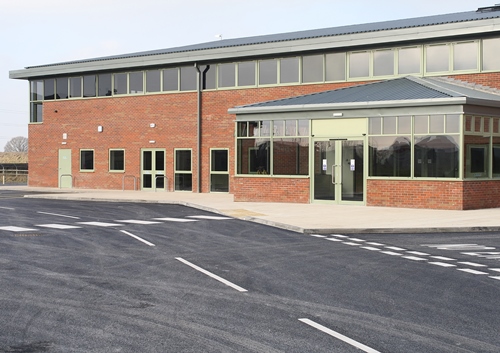 A project to provide leading auctioneer Halls with a new head office building has been given the thumbs up.

The project comprised the construction of a new 20,000 sq ft office development in Shrewsbury, in order to relocate Halls’ main base of operations to a more suitable location. The brand new building – known as Halls Holdings House – was constructed adjacent to Hall’s livestock market and brings all of the company’s operations all together in on place.

Giving the project his seal of approval, Director of Halls, David Giles, said:

“We are confident that Halls Holdings House will become an important powerhouse for the fine art department, expanding the business that has been developed over the past 50 years.

“It is something that we have wanted to do for a generation and now the dream is finally realised.”

Work began on the Design & Build project in early 2012 and reached completion in March 2013. SJ Roberts Construction was the main contractor on the project, whilst Powys-based practice Philip Humphreys Architects provided all architectural services.

The new building was designed to include a number of environmentally friendly features, such as solar thermal panels and photovoltaic (PV) panels. Meanwhile a rainwater harvesting system will collect water from the roof of the new building and will be used for hosing down at the livestock market on the adjacent site. This will be carried out in the near future.

To complete the project a large 110-space parking area was installed onto the site, providing improved parking provisions for Halls’ customers.

“Although the project was on a tight budget and time frame there were no major problems and everything ran according to plan.

“The feedback so far from Halls has been very positive and this will certainly make their operations run a lot smoother moving forward. Prior to the construction of this new office building, Halls were operating out of a rather cramped site, so now they will benefit from a more spacious facility, which will in turn provide a better experience for customers.”

“Seeing projects like this one take shape is very important to us at Philip Humphreys Architects. Although the building was a fairly simple design, we worked with a tight budget to create a flagship facility that could meet the requirements of both Halls and its customers.

“Halls Holdings House is located in a prominent position on the edge of the town and will be seen by a lot of people coming into Shrewsbury. Halls were keen to make their new building as environmentally friendly as possible and I believe we have achieved this to the best of our ability.”

Halls is one of the UK’s most respected estate agents, chartered surveyors, auctioneers and valuers. The company has a network of ten offices throughout the UK, covering Shropshire, Worcestershire, Mid Wales, the West Midlands and neighbouring counties.