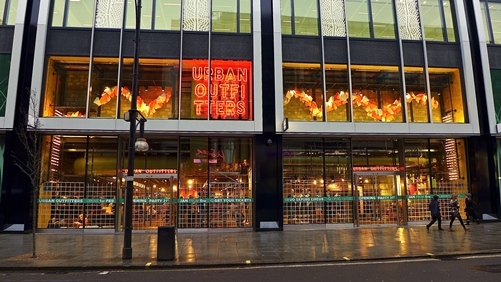 The new store is part of the Park House development which has seen huge efforts to reinvigorate the area. Both Topshop and Zara unveiled new stores there last year, while the existing New Look store had a large shop refit in November.

In order to strike a niche in the area, Steve said that the “store interior and visual merchandising team gets involved with the store design team from the outset and by knowing the inspiration for the store design, we can follow through.”A team of 20 ‘display artists’ were drafted in before opening, ensuring that the store was really different from what had gone before.

Steve added: “Every single wall is put together by the display artists. The artists are also responsible for many of the bespoke elements that are found as the shopper walks the store, meaning that it is quite a sensory overload.”

Likely to catch the customer’s eye is the 1,000 sq ft square hole at the heart of this Urban Outfitters ground floor. The idea behind the hole was to provide instant sightlines to what is in the basement.

As with other Urban Outfitters stores there is a very familiar industrial feel, this is foster by the use of raw concrete and warehouse-like lighting. Other design features include a glazed plant room and a walk-in glass shoe environment.

The stairwell on the way down to the basement is adorned with light-boxes, reinforcing the brand. Within the basement the industrial feel continues, the cash desk counter has a glass front, allowing the wiring for the tills to be viewed and on the ceiling there is ducting everywhere.

Marble Arch is a very different proposition from the Oxford Circus shop and is testimony to the way in which a space can be created that is different from all of its counterparts, whilst simultaneously coming from the same recognisable stable.

The store boasts an essential collection of carefully edited own brand products with the most up and coming brands: Antipodium, April May, APC and House of Hackney for women and Obey, Libertine Libertine, Edwin and Anerkjendt for men.

To celebrate the launch earlier this year Urban Outfitters had a party within the store.  Guests were offered free haircuts, beer and refreshments in addition to a DJ set by Tim Sweeney.