The Three Port Strategy is a £22 million development designed to provide the marine renewable industry with upgraded and new-build pier and quayside facilities.

The project comprises the redevelopment of the ports of the former Naval base of Lyness in Scapa Flow; the extension of the existing Hatston Pier at Kirkwall; and the construction of a new pier at Coplands Dock in Stromness.

The developments at Lyness, Hatston and Stromness will support the trialling of technologies at European Marine Energy Centre (EMEC), as well as the future development of commercial scale wave and tidal arrays in the Pentland Firth and Orkney Waters.

“The Three Port Strategy is primarily being implemented to facilitate a number of new development opportunities in the area, concerning the marine renewables and off-shore oil and gas sectors.”

The first of the three projects to reach completion was the £3 million Lyness project, which saw the site upgraded.

“The reason we upgraded Lyness was because it is immediately adjacent to the Pentland Firth, where a number of marine developers have been given leases to place their devices in the water. The site is ideal for future operations for marine renewables and was an important phase in our Three Port Strategy.”

Local construction company Currie Brothers was the main contractor on the Lyness project. The contract was awarded in October 2010 and work was completed in September 2011.

“Working as the main contractor on Lyness was very important to us. The marine environment in Orkney is one of the harshest in the world and certainly has its challenges. However we have been in business for 26 years, so we know everything there is to know about working in Orkney waters.”

“We are a local company, this was a local development and we used local subcontractors, so it was great to be involved with a project that enhances the area.”

Lyness is a port on the east coast of the island of Hoy, Orkney. The port has an interesting history having provided a home to HMS Proserpine during World War II, where it was the main base for the naval fleet based at Scapa Flow. 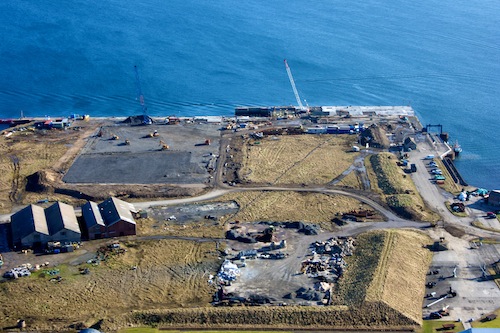 “Lyness was a former naval port which served the home fleet for two world wars, accommodating more than 10,000 service personnel during the Second World War.”

“At the moment we have two companies operating from the area, with one establishing a base for ship-to-ship operations for oil and gas, with a look towards what can be achieved within the future. This is very much a ‘crystal ball’ scheme, because it is going to take a few years before the marine developers get to the commercial stage. However we have had a lot of interest from companies who are looking to develop their businesses here in the future so we are very pleased with the work that has taken place on this project.”