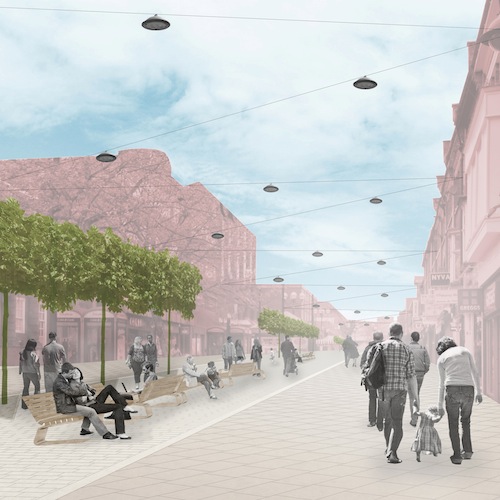 Harrow is investing a whopping £2 million into its town centre in a bid to rejuvenate the whole area and rival other London boroughs.

The town’s main shopping street, St Ann’s Road will receive a facelift, thanks to the investment, as will Havelock Place, St George’s Shopping Centre and Lowlands Recreation Ground.

The grant was awarded to Harrow Council courtesy of the Mayor of London Outer London Fund. With works due to be completed in November this year Harrow Council aim for the area to be transformed into a bustling hub of activity. The regeneration project hopes to create improved trading opportunities for local businesses and establish an attractive arena to stage events.

David Kohn Architects were appointed by Harrow Council to carry out the street improvement scheme on St Ann’s Road in May 2012. They have worked alongside the council’s design team, and continue to do so, with the aim of enhancing the character of the main shopping street. Harrow Council is eager to attract more businesses and visitors to the borough.

“Before the regeneration St Ann’s Road was extremely cluttered; so much so that shoppers could not see the extended of the high street and the shop fronts.

“There were light columns, street signs, phone boxes and branches in the way so our approach was to make a more uniform and attractive space.”

Previously chaotic and overcrowded, St Ann’s Road has now been converted into a leafy haven where shoppers can unwind in newly erected seating areas after a hard day of retail therapy. Following landscaping work the development will be lined with special trees at the beginning of November, creating an open, spacious shopping district.

Tendercare, an award-winning specialist plant nursery based in Uxbridge, will supply the 19 Boxed Plane Trees that will add a splash of colour and vibrancy to the town centre.

Managing Director, Andrew Hawksworth, who negotiated the contract with Harrow Council, said the manicured trees are growing in popularity as they retain their shape for longer due to being pruned into a narrow boxed shape.

“It is a local, prestigious project which is great for us to be involved in. It is also quite unusual featuring these types of trees which, although popular, are still a relatively new thing so it’s great to be involved.”

May Gurney Infrastructure Services have worked alongside Harrow Council and David Kohn Architects to completely overhaul the town centre. The 300 metre street, which lies at the centre of Harrow, has been repaved and the number of BT phone booths has been vastly reduced.

A delimitated strip in the centre of the street marks the area for market stalls. Empty planters and the unused police kiosk have been removed and developers have worked non-stop to create a welcoming space for local people.

The Project Architect Josiane said that David Kohn Architects are extremely pleased to be involved. She added:

“It’s been a very exciting commission for us. We enjoy improving the public realm as it makes a change for a bigger community than working for a private client.

“I think the regeneration will attract more people to Harrow. It will also be an inviting space for people currently living in Harrow to stay and have a break and relax.”

Josiane said May Gurney workers have endeavoured not to disrupt normal trading in the town centre whilst the construction work has been active. They have ensured work is only carried out in front of businesses for a few hours at the most, so shops are able to remain open.

The St Ann’s Road project is due to be completed in November. The main shopping street regeneration project is one of several interlinked projects aimed at improving public spaces in and around Harrow town centre as part of the 15 year “Heart of Harrow” scheme.

Lowlands Recreation Ground, by Harrow-on-the-Hill station, has been revamped into a multi-use performance space which will host regular outdoor events. The development is now home to a brand spanking cafe, play area, park pathways and an extension into the Station Approach. Urban design and landscape architects Adams and Sutherland have partnered up with Harrow Council and Assemble Studios to give a vibrant, new edge to the previously worn park.

Councillor Keith Ferry, Harrow Council Portfolio Holder for Planning and Regeneration, has said he is extremely pleased to be working with Adams and Sutherland. He is sure the new park will provide a “unique and magical place for culture and arts to flourish” in Harrow.

An important pedestrian connection and service delivery route in the town centre, Havelock Place, has also been redesigned to improve access to the shopping centre and surrounding residential streets.