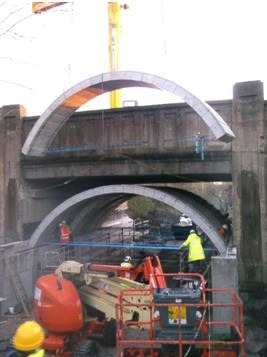 A bridge which spans the National Cycleway Route 66 in Greater Manchester has been refurbished.

Built in 1935, Jubilee Bridge in Tameside was originally a reinforced concrete bridge, named to commemorate the Silver Jubilee of King George V. Over the past 80 years the bridge had started to deteriorate and was suffering from extensive corrosion to the steel reinforcement and spalling concrete, resulting in the need for refurbishment.

Using Macrete’s Flexiarch solution, engineers from Tameside Council were able to solve the problem, giving the bridge a new lease of life. With work now complete on the £420,000 project, Jubilee Bridge has a design life of 120 years.

Work reached completion on the project in March 2013. Wilde Constructing Engineers was the consultant on the project, whilst A.E. Yates Ltd of Horwich, Bolton was the main contractor, completing the refurbishment within just six weeks. Established in 1870, A.E. Yates Ltd is a civil engineering and tunnelling contractor, specialising in a range of works, from environmental improvements and motorway construction & renewal, to river & canal works and sewerage & wastewater treatment schemes.

“Our engineers became increasingly aware of problems due to spalling concrete and corroded reinforcement on Jubilee Bridge, caused predominantly through carbonation and chloride attack.

“The application of sprayed concrete to the bridge deck soffit in 1974, in retrospect, made it far more difficult to assess the full extent of the problem. Wilde Constructing Engineers suggested using the Macrete ‘Flexiarch’ system to provide the best value for money solution.”

Jubilee Bridge links the communities of Waterloo and Smallshaw in Tameside and carries Wilshaw Lane over the former Ashton to Oldham Railway. The railway is now disused and forms part of Route 66 of the National Cycleway Network, which is maintained by Sustrans.

Wilde Consulting Engineers considered five options, including demolishing and rebuilding the reinforced concrete bridge deck, before coming up with the Flexiarch solution. The solution involved the construction of temporary ‘sacrificial’ abutments which were used to land the Flexiarch units and to jack them into the place underneath the existing bridge deck.

The refurbishment of Jubilee Bridge marked the first time that Flexiarch units have been used in a bridge strengthening project. Throughout the project, A.E. Yeates Ltd worked very closely with Macrete to plan and develop the installation.

To facilitate the works, the existing cycle route across the bridge had to be diverted and nearby Wilshaw Lane was closed for two weeks whilst the pre-cast arch units were lifted into place.