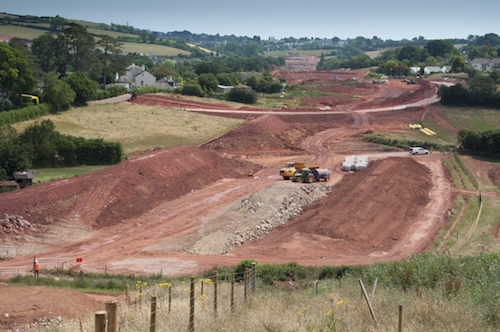 The South Devon Link Road project is a three-year scheme designed to provide the long awaited bypass for Kingskerswell.

When complete in December 2015 the 5.5km dual carriageway will bypass the existing A380 between Newton Abbot and Torbay, improving journeys and bringing economic benefits.

The improved access to Torbay and South Devon is expected to create nearly 8,000 jobs in South Devon, with a further 3,600 in Torbay. It is predicted that the new road will remove 95% of traffic away from Kingskerswell, which in turn will restore and revitalise the village.

The £110 million cost of the development has been covered by £76.4 million from the Government, £33 million from Devon County Council and Torbay Council’s budgets and a further £500,000 from Teignbridge District Council.

Commenting on the project, Gordon Oliver, Mayor of Torbay said: “The new link road is vital to the Bay’s economic regeneration plans. It will considerably improve access to Torbay and help us with our efforts to attract new investment and create thousands of new jobs in the Bay.”

Andrew Leadbetter, Cabinet Member for Economy at Devon County Council, said: “The county council is committed to boosting Devon’s economy. This major project will bring lasting economic benefits to South Devon and we believe will help to create new jobs.”

The South Devon Link Road project was granted full approval by the government in May 2012, with work getting underway in autumn of the same year. Galliford Try is the main contractor on the project.

At present the piling and earthworks have progressed to allow utilities diversions to take place along the A380. In late September work began at St Marychurch Road, which included the first stages of road widening. Traffic management was put into place throughout this phase of the works.

Current works include, soil nailing to a wall at a nearby Sainsbury’s, along with culvert works, as well as the continuation of earthworks in the Aller Cross area.

During 2015 work on the Flyover Bridge will reach completion and the work on Edginswell Junction will also reach a conclusion.

The South Devon Link Road partnership consists of Devon County Council and Torbay Council, who are working in conjunction with Galliford Try. Throughout the scheme a Community Liaison Group has also been set up to keep local residents updated on the latest developments.

The Community Liaison Group predominantly comprises the people of South Devon who either use or live close to the new link road and also includes representatives from Torbay Council, Devon County Council and Galliford Try. The group provides an important platform for group members to ask questions on behalf of residents’, regarding the construction programme.