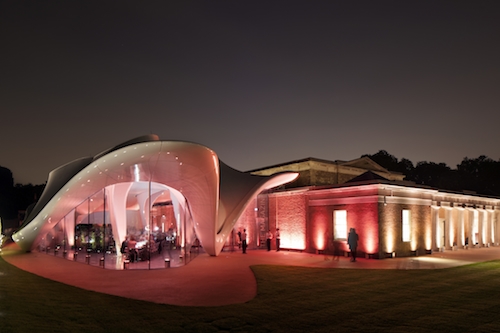 The Serpentine Gallery has opened a brand new arts venue in The Magazine building in Kensington Gardens, London.

The Serpentine Sackler Gallery opened in September and aims to be a cultural destination in the centre of London hosting a range of exhibitions and events.The new venue also hosts The Magazine restaurant which was unveiled on the 1st November.

Berlin-born chef Oliver Lange will head the galleries new eatery fusing his passion for Japanese cooking, and British and European ingredients on the restaurants impressive menu. The restaurant is located five minutes’ walk away from the main gallery on the north side of the Serpentine Bridge. The Magazine building is steeped in history as it used to be a former 1805 gunpowder store. 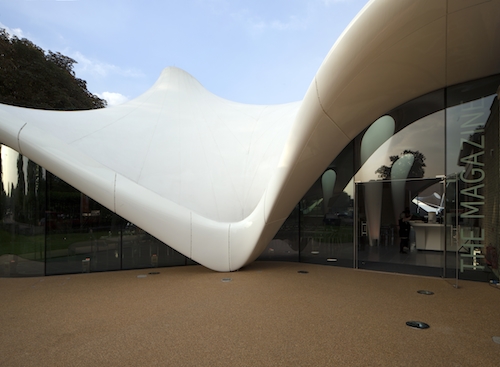 The restaurant has clear glass walls which transport diners into a make-believe al fresco dining environment. Lunch, dinner, weekend brunch and traditional roasts for Sunday Lunch will be available at The Magazine. Using the finest British ingredients throughout the contemporary, seasonally changing a la carte menu Oliver Lange is set to wow diners with sumptuous dishes.

Fabian Hecker, Project Architect on the development, spoke to Premier Hospitality about the project:

“It was very interesting for us to give the space a certain flexibility so it can be used for all types of functions. We designed both the gallery and the restaurant, and it emerged quite quickly that the approach we wanted to take was to play with the contrast of the old and the new.”

“Whilst the Magazine building was refurbished in keeping with its historical context, the new extension was designed to complement this solid and classical structure with a contemporary light, transparent and dynamic space.” 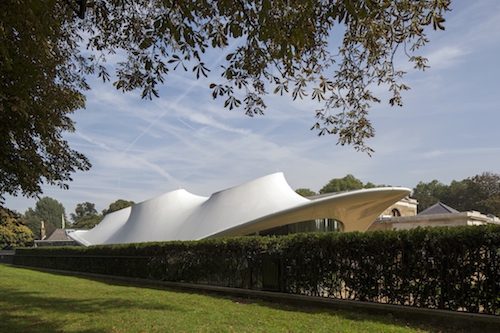 The wine list is also eclectic hosting an array of beverages including favourites from the Old World as well as German, Austrian and English wines, New World wines and an ‘artists series’ of fine wines. The cocktail list will make reference to the Magazine’s history as well as the kitchen’s Japanese and British roots.

“I am thrilled to be in London, it’s exciting to be in a city that has a restaurant scene that is vibrant and diverse and be amongst so many brilliant chefs. I have a terrific team working with me and we looked forward to opening The Magazine.

“People often ask me about my style of cooking and my response remains unchanged – cooking should not always be so defined; it evolves from one style and then reinvents itself to another.  I cannot limit my cooking to one description; however one thing that never changes is my passion for being in the kitchen.”

Oliver perfected his craft from an early age, travelling all over the world to learn about different cuisines. He settled in Japan and learnt the tastes, techniques and textures of the Japanese kitchen. He now combines the precision and dedication of Japanese cooking with his own European heritage. 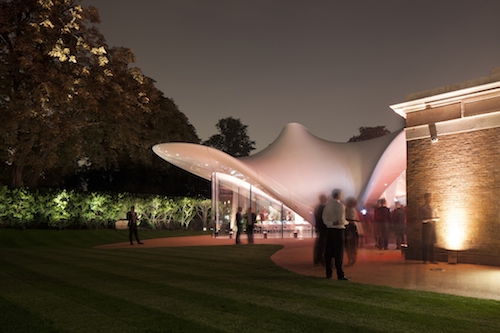 From autumn 2013 the Serpentine will present a varied programme of exhibitions and events across both galleries and into Kensington Park. The new Gallery is named after Dr Mortimer and Dame Theresa Sackler as they established a Foundation which made the project possible. The Foundation donated the largest gift ever received by the Serpentine Gallery in its 43-year history.

Funding to renovate The Magazine building was also received from Bloomberg, who are long term supporters of the Serpentine as well as sponsors of the opening exhibition.

The Serpentine Gallery, which boasts modern and contemporary art, currently attracts 800,000 visitors a year. The Serpentine Sackler Gallery is housed in the Grade II*listed building formerly known as The Magazine. 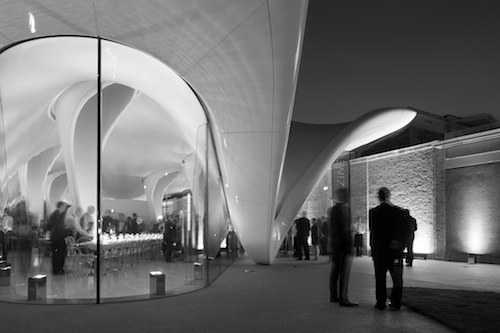 Connect-ES, and Connect Fire and Security were instructed by main contractors Galliford Try to provide electrical services and a fire alarm installation at the new Serpentine Sackler Gallery in London’s Hyde Park.

On a programme of 15 months, with an average of five staff on site, main works included LV distribution, lighting with automatic control, voice/data transmission and the fire alarm system with beam detectors.

“It was a great opportunity to work on a Grade II listed building that has exceptional historical background and will continue to be of interest to so many in the future. We wish every success to all the staff at the Serpentine Gallery.” 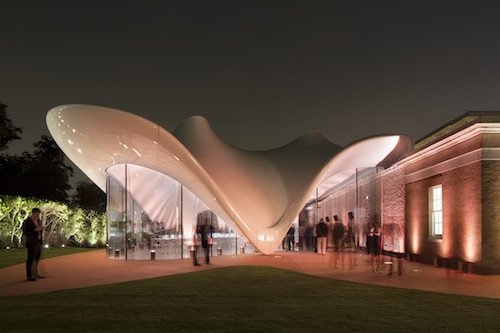 The company has been in operation for over 25 years and has worked on a wide range of high profile projects including the last five of the Serpentine Gallery’s summer pavilions. They have also worked on all the Olympic and Winter Olympic ceremonies since Athens 2004, installing awe-inspiring stage equipment and scenery, most notably collaborating with Thomas Heatherwick during London 2012, to engineer and build the impressive cauldron.

Stage One’s most recent project was to help Zaha Hadid Architects realise their designs for major elements of The Magazine restaurant at the Serpentine Sackler Gallery. Stage One manufactured the show kitchen and bar, using FRP (fibre reinforced polymer) to achieve the distinctive fluid shapes required.

Neil Franklin, Interpretation Project Manager for Stage One told Premier Hospitality why the company were so happy to be involved with The Magazine project:

“This project was unique for us as it was an opportunity to work with both the Serpentine Gallery and ZHA, both important clients who provide us with the chance to work on interesting projects that make excellent use of our skills.”

“We pride ourselves on our world-wide reputation for expertise, innovation and delivery. Earlier this year, we were awarded a 2013 Queen’s Award for Enterprise in the category of Continuous Innovation, in part awarded for our work with diverse and often unusual materials.”