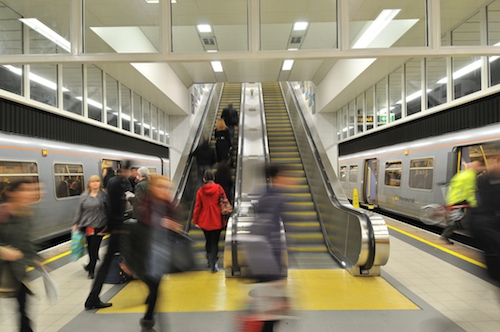 A £13 million refurbishment of Liverpool Underground Stations has been completed by Network Rail.

James Street, Liverpool Lime Street and Central Station have so far been renovated, with works to begin on Hamilton Square and Moorfield Station following a further procurement process.

Premier Construction caught up with Network Rail’s Project Manager, Richard Davies, employed by Network Rail Infrastructure Projects, who was responsible for the delivery of the works on a day-to-day basis.

Richard said Morgan Sindall, the main contractor, was awarded the contract in December 2011; as it was a design and build contract Morgan Sindall Professional Services carried out the design process. Works started at Central Station in April 2012 with access to the Wirral Line reopening in August, the Northern Lines (the full station reopening) occurred in October 2012.

The team moved to work on James Street station at the end of October. A key objective behind the works was the drive for enhancing safety. Richard said:

“During the project we looked at the combustibility of the materials we had on site as we wanted to achieve a class zero fire rating. We replaced more combustible materials with vitreous enamel, and in certain places used an in-situ spray system on the tunnel linings creating a safer environment for passengers.

“With regard to working around the operational requirements of the stations we awarded the contract role early so we had a lot of time to plan the work and cause minimal disruption. We closed Central Station for a period but managed to maintain the passenger flows through other stations; so passengers went to James Street or Lime Street. We ran alternative train services, making passengers aware through a joint advertising campaign with Merseyrail.”

Work often took place overnight in James Street and Liverpool Lime Street so that passengers were not affected by a closure of the loop lines. A barrier system was used and work was conducted on the tunnel linings or the platform where the trains would usually be travelling.

The project also involved demolition, renewing platform surfaces, lighting, as well as installing new escalators and stair systems. These upgrades aesthetics works that Mersey Rail was carrying out on the concourse and conformed to the access strategy for each station.

Richard said Network Rail has received a lot of positive feedback since the project’s completion:

“I think the project worked really well; one of the key things for us was to make sure that we had our supply chain in place early enough to be able to hold extensive discussions around operations. We also wanted to maintain passenger awareness as well.

“We had a lot of contact with Merseyrail, who operate the trains, and communicated with passengers and station users to help them understand the impacts on them. Overall the stations look great.”