A joint project between church and community to rebuild an old Sunday school destroyed by fire is nearing completion.

The Ponsanooth Methodist Hall in Cornwall is currently entering the final stages of construction with work set to reach completion in April 2014. An official opening service will take place at the building on 1st June exactly six years to the day the original hall burnt down, with the hall opening to the public the following day.

The new hall has been carefully designed to provide the local community with much needed modern facilities and will provide the perfect home to many groups and activities. As such, the construction of the hall has been truly embraced by the community, with many villagers contributing to the fundraising schemes which have aided the build.

Speaking to Premier Construction about the new hall, Chairman of The Friends of Ponsanooth Hall, Chris Trewern, said:

“The Methodist Church had the building insured but rather than reinstate a Victorian Sunday school we went to the village and discussed what would be required moving forward. A lot of feedback on this project suggested that the community should apply for funding and pool resources with the church to provide a building fit for future community needs during the next hundred years. This was achieved from the Garfield Weston Foundation, the Methodist Church and Kerrier District Council and added to the church insurance settlement. When completed the building will be leased to Ponsanoth Hall Management Company, which will be responsible for its future administration and maintenance.” 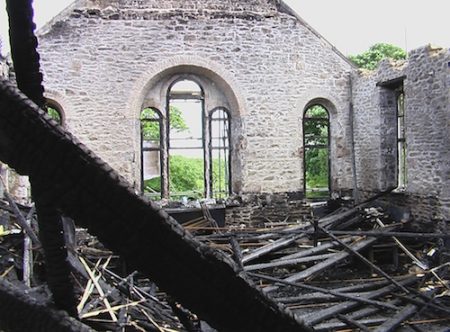 “The hall is being built on a sloping site, so we are making the best use of the slope. Upon entry to the left there is a lower ground floor which occupies approximately half of the area and forms the community space. The ground floor contains the main hall, with kitchen, storage area, office and toilet facilities, whilst the first floor contains a meeting room and consultation room. All of the rooms have modern facilities.”

Work began on the project in July 2013, with Midas appointed as main contractor and Poynton Bradbury Wynter Cole providing architectural services. In addition to the construction of the building, some landscaping work will take place to tie the new building back into its surroundings.

Construction work on the project has continued to make good progress with only a small delay in the construction programme due to a slight change in the initial plans, as explained by Chris:

“The biggest challenge we faced was when we altered the plans to enlarge a store area to become a community space. When we excavated we discovered there was very little in the way of foundations to the building so we altered the plans again, so that the room could run lengthways and this caused a little extra work to the programme.”

Ahead of the project’s completion, an open day took place in February to guide prospective users around the new building. The initial feedback was extremely positive, with many visitors looking forward to making use of the facilities come opening day.

“I was involved in getting the building into shape before the fire, so this site has effectively taken up around ten years of my life. People have commented that perhaps, the fire has done more for the community spirit than anything else in living memory.

“The contractors have also been great and we couldn’t have asked for anymore cooperation. Whenever we have had problems we have worked together to solve the, whilst remaining on budget. Nothing has been too much trouble.”