Halton Borough Council and the Merseylink consortium have announced procurement savings of £250 million by reaching financial close on the Mersey Gateway Project.

This means that all the 30-year contracts between Merseylink and Halton Borough Council have been agreed and the funding committed that will enable construction to commence immediately and the project to be operated and maintained for the next thirty years.

Since the project received preliminary support from Government in 2006, Halton Council has delivered this important project through a complex planning and procurement process.

From the beginning, keeping the project affordable has been the project mantra, and Halton Council can now announce that the innovative procurement programme has delivered impressive savings of £250 million under the budget set by Government in 2011.

“This has been a tremendously long journey and I’d like to pay tribute to the hard work of everyone who has got us to this point and delivered millions of pounds of savings on the project. This is an historic day for Halton, but in many ways the real work starts now. We’ll now be working closely with the Merseylink team to help build a bridge that will create jobs, encourage investment and be a catalyst for regeneration in the area.” 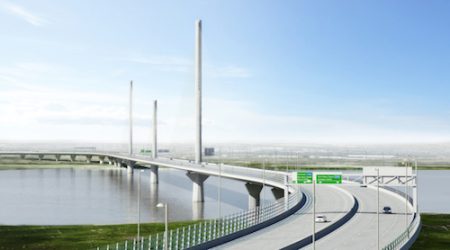 “The consortium’s equity partners of Macquarie Capital Group Limited, Bilfinger Project Investments Europe Limited and FCC Construcción are extremely pleased to have concluded the financial and commercial arrangements for this project and look forward to its commencement.”

“We’re very pleased to have finalised this deal. The Merseylink consortium brings together leading bridge design, construction and tolling professionals who have worked on projects around the world, and I know the team is very excited about the Mersey Gateway Project. We’ve already started our work to engage with the local supply chain and potential employees and the response we have had has been encouraging.”

Steve Nicholson, Interim Chief Executive of the Mersey Gateway Crossings Board and the Project Director leading up to financial close, said:

“When we set out our procurement approach three years ago we deliberately chose a strategy that would allow our potential private sector partners to innovate, save money for the public purse and add value to the project. Merseylink has delivered on all three fronts and we are excited to be concluding this deal today.”

On the ground, the project is already bringing new jobs, contract opportunities and investment to the northwest region.

A number of initial contracts worth a total of £10 million are ready to be announced by Merseylink with the majority going to northwest businesses.These include contracts for demolition works across the borough, a contract for the construction of the main haul roads to access the river works, and contracts for the construction of the cofferdams and trestle bridge to access the main bridge foundations.

There has also been a strong response to Merseylink’s call for CVs and applications from local people who could be part of its eventual 500-strong workforce on the bridge. Over 1,200 CV’s have been submitted in the first wave of recruitment.

Merseylink is also publishing its outline works programme for the three-and-a-half year construction of the new bridge. The next few months will see work starting onsetting up the accommodation compounds on both sides of the river;final demolition work around Ditton, Astmoor, Catalyst Trade Park, Victoria Road and Hutchinson Street; and access roads constructed across the saltmarsh to the river in both Widnes and Runcorn. Additional work includesconstruction of two pylon cofferdams in the River Mersey from floating barges; two floating trestles – one from each side of the river – to take vehicles to the two pylons; and the upgrade of the road network in Runcorn starting at the Bridgewater Interchange and M56 roundabout.

Work will continue through to an anticipated bridge opening date of autumn 2017. Once it is open there will then be an opportunity to close the Silver Jubilee Bridge whilst it undergoes essential maintenance and is remodelled as a local bridge with improved facilities for pedestrians and cyclists and better public transport links.

The project is being funded over this 30-year period by a mix of tolls paid by users and the grants from the UK Government. The Council will not make any payments to Merseylink until the road is open and toll revenues and Government grants are available to fund these payments.

To finance this delay in receiving revenue, the Merseylink consortium has put in place finance arrangements, which include making use of the new UK Government IUK Guarantee Scheme to guarantee £260 million of the senior debt required, with the balance of the finance provided by four banks and the Merseylink sponsors.

The procurement savings have enabled the project team to deliver toll levels at a similar level to the nearby Mersey Tunnels and to introduce a discount scheme for eligible Halton residents, which will give them up to 300 free trips a year across the river.

Halton Borough Council has set up a new company – the Mersey Gateway Crossings Board – which has the delegated authority to deliver the Mersey Gateway Bridge project and to administer and oversee the construction and maintenance of the new tolled crossings, including the tolling of the existing Silver Jubilee Bridge.