Rotorino, an elegant Italian restaurant and wine bar, has recently opened in Dalston, Hackney. The venue is the brainchild of successful restaurateur Jonathan Downey and renowned chef Stevie Parle.

The venue opened its doors in April this year and so far has received a fantastic reception. Premier Hospitality caught up with Jonathan Mangham, the owner of Mango Architecture, who worked on the Rotorino project. He said:

“I have worked with Jonathan since 2002 and have established a great working relationship over the years. This partnership allows us to do things in an unorthodox way and not necessarily plan everything out beforehand. We have both also worked with Terry Heywood for a number of years; he is the owner of construction company Town & City Renovations, who were the main contractor for Rotorino. 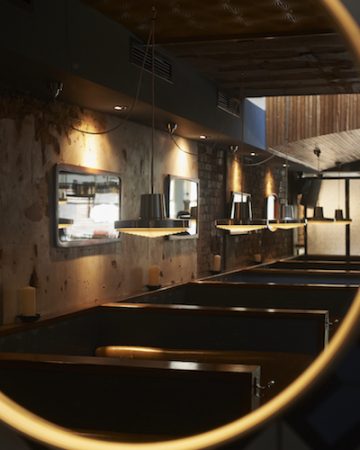 “I have worked on numerous venues with Jonathan including Soho based Milk & Honey. There never really is a specific detailed design brief when Jonathan and I work together. All we set out to do in this instance, when I became involved in December 2013, was create a relaxed but grown up Italian restaurant and wine bar and the design just grew over time from that idea.”

Rotorino is located on Kingsland Road in Dalston and works began in December stripping the venue out to its original shell. At this stage the Rotorino team also began thinking about the best design to attribute to the restaurant. The venue was previously an Indian restaurant beforehand which was bland in design, luckily during the strip out process the team uncovered some interesting features including a striking roof light and brick walls, that had been hidden behind plasterboard sheets.

The venue spans one floor; upon walking into the venue guests are greeted by a large bar on the right hand side and a vast communal table down the centre of the space. On the left hand wall there is a bar height counter which customers can use whilst having a drink in the wine bar.

The space then leads through to the restaurant area and a series of booths are situated down the left hand side, complemented by a mix of tables and vintage furniture in the centre of the restaurant. Located towards the back of the venue are the toilets and kitchen.

The venue has been influenced by a 1950’s design and patterned tiles can be found throughout the space which complements the cherrywood stripped arch ceiling and lino floor with a geometric pattern. The venue is not a huge space with only 60 bookable covers in the restaurant are and about 50 unreserved seats in the bar area.

With regards to the construction challenges Jonathan Mangham said there were relatively few:

“The project ran pretty smoothly; we did discover a leak in the roof but apart from that there was nothing that hindered our progress. We instead tended to uncover things that were of benefit to us during the strip out process which was great.”

Rotorino marks the first partnership between Stevie Parle and Jonathan Downey – the mastermind behind the supremely successful Match Bar Group – and depending on the success of their debut venue lead designer Jonathan Mangham said there are sure to be further venues.