The construction of a stunning glass extension to an ancient manor house in Winchester has been completed.

The renovation project has been nothing short of eventful after an archaeological team uncovered a number of remains, which were confirmed as being of Roman origin. The onsite team, assisted by main contractor Cranworth Building Contractors, also discovered defensive fortifications including a rare Roman burial urn.

Andy Ramus, Director of AR Design Studio, and the founder of the Glasspace system, used his previous knowledge of the product and engaged with Glasspace to undertake the project. Glassspace provided the client with a high quality product, which pushed their design limits with its size and span. The completed development now boasts an impressive frameless glass space which connects the back of the house to the garden.

AR Design have created a new open plan kitchen, living and dining area within the extension and have also undertaken extensive refurbishments in the main property, including the construction of a new basement, opening up the entrance space and implementing double height space throughout.

The extension completely reinvigorates the space and changes the feel and atmosphere of the previously dark and cramped servants’ quarters. The site is steeped in history having been built in 1856 by the Earl of Airlie whilst serving as Camp Commandant at the nearby Peninsular Barracks military base.

The extension also comprises four large double bedrooms, each with an en-suite bathroom; the master suite has its own walk-in wardrobe and views overlooking the garden. AR Design Studio’s design concept was to provide a clean and light architectural space alongside the traditional shell of the building. The spaces – the extension and the refurbished original property – have been designed to accentuate a play between light and dark; contrasting from the bright and open communal spaces to the more subtle and secluded, almost cave-like retreat spaces in the old house.

Works to the property’s existing layout was undertaken and vertical voids were cut through in order to unite the cellar, ground and first floors and redirect the houses user towards the new glass space at the heart of the home. The glass space allows sunlight to flood through the home and filter into the new rooms creating gorgeous shards of light and shadow throughout. 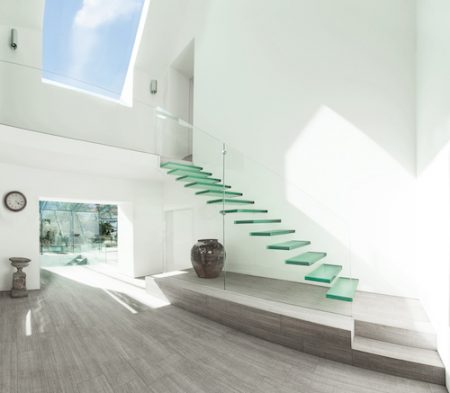 The placement of the large roof light floods the entrance hall and the timber ceramic floor tiling acts as another feature of the impressive space. The tiling was also used as an alternative to traditional timber flooring because it does not discolour in the weather and is a perfect surface to compliment the underfloor heating throughout. The tiling then runs into the luxury cantilevered patio.

The property has now been renamed Clarkes and has been completely transformed from its previous tired state. The modern renovation and extension creates a light, airy and open living environment bursting with contemporary style and innovative design.

The property has been recognised by RICS Awards 2014 for its impressive architectural and building features. The building was shortlisted in this year’s South East category and has been acclaimed as an inspirational regional initiative.