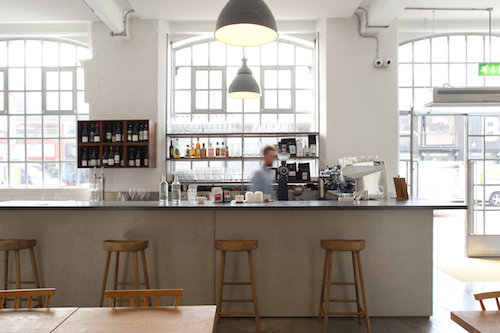 Located on the ground floor of the iconic building the restaurant interior reflects the era of the Tea Building with a strong reference to British manufacturing and design from the mid-century.

The venue opened on the 29th April this year and takes its name from James Lowe’s mother’s maiden name. Located in the eight storey Tea Building, which dominates the junction of Shoreditch High Street and Bethnal Green Road, the restaurant has been designed to an uncomplicated, simple and relaxed brief which pays homage to British manufacturing and design. The space spans 120 square metres and provides room for 52 diners; thanks to the three vast factory-paned windows to the front elevation of the building the restaurant is always flooded with natural light.

Premier Hospitality caught up with Gabrielle Vergottini, from B3 Designers, to find out more about the design of the venue. She told us:

“We wanted to reference the existing fabric and architectural features of the building, and so the space includes a poured natural concrete floor with simple, white crackle glazed tiles, as well as painted brick creating an un-intimidating, comfortable dining space.

“The venue contains an open kitchen and a five metre long pass counter that also doubles as a waiter station and storage unit. The joinery features honest details with a subtle contrast in woods with rich Iroko and warm, waxed Oak.”

The restaurant contains one style of seat setting; two person tables shrouded with reclaimed Ercol stick back chairs. The ceiling is gridded with large grey industrial lights which have been suspended within the concrete coffers of the existing ceiling and were sourced from an aerospace factory in Coventry.

B3 Designers were extremely proud to be involved with Lyle’s, a spokesperson added:

“It’s not often that we get to design within one of London’s most historic and iconic commercial buildings, and right in the heart of East London so on B3 Designers’ home turf as well! James and John had great clarity from the start of the design process so it’s been a nostalgic and patriotic process referencing styles from the mid-century era whilst honouring and paying homage to celebrated British manufacturing and design. The non-fussy interior is the perfect centre stage for James Lowe to express his culinary skills.”

London-based B3 Designers were founded in 2002 by Mark Bithrey and since their inception have won awards due to their innovative design approach. The design teams at B3 Designers are well versed at creating distinctive, fresh and contemporary designs for the interiors of hotels, bars, restaurants and retail spaces.  The firm has established an impressive portfolio having worked on an array of projects such as One Kensington restaurant on Kensington High Street; Las Iguanas in Wembley and Bristol, as well as Gymkhana restaurant in Mayfair.

Salix Commercial Kitchens manufacture and design bespoke stainless steel chef’s kitchens, bars and food equipment for UK’s leading retailers and London’s finest restaurants and hotels. Having been in operation for almost 25 years the firm has built up an impressive portfolio working with the finest names in the hospitality industry.

Salix has recently completed working on renowned chef’s Jason Atherton’s restaurant City Social in London. The firm have also just completed design and installation projects for Restaurant Story with Tom Sellers, Pitt Cue Restaurant with Tom Adams and The Chiltern Firehouse. Premier Hospitality caught up with Rod Cullen from Salix to find out more about the firms involvement in their most recent project, Lyle’s restaurant. He told us:

“I have worked with James Lowe, the owner and Head Chef of Lyle’s, in the past at St John Bread & Wine restaurant where we established a great working relationship. James therefore contacted me about a new site in Shoreditch in East London, which was currently a gallery, and said he wanted us to visit the site to see if it was possible to create his own restaurant into the space, as it was such a great location.”

Located in the famous TEA Building, Rod helped James assemble plans for the restaurants kitchen and bar and carried out a feasibility study in order to ascertain whether the space was right. Rod and the Salix team then designed the kitchen from scratch and began works on the manufacture and installation of the kitchen.

Rod said the project has been very important to the Salix team:

“James Lowe is a great chef and is very well known within our industry with great connections. Lyle’s is one of the biggest openings in London this year and houses an impressive open plan kitchen which diners can see as soon as they enter the venue. It was also very satisfying knowing that some great chefs from around the world were also in the kitchen having a tour from James, as he hosted the Chefs 50 Best Lunch this year.

“James is very driven and knew exactly what he wanted so was great to be part of his vision.”

Salix prides itself on being one of the only companies that manufactures all of the appliances their clients need. The firm do not sub contract any works out to specialist traders, instead they manage the running of the whole project from start to finish offering a one stop shop to their clients; ensuring that whatever is required Salix can deliver!