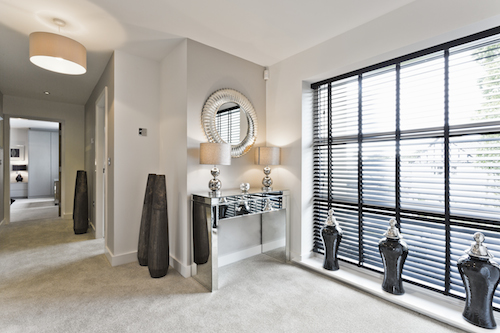 The site is situated on The Old Highway close to The Welsh Mountain Zoo in the much sought after area of Colwyn Heights.

The land was previously an overgrown garden area for a local nursing home, the land was bought by Ravenscroft, taking it out of the hands of the nursing home that were struggling to manage the area. The site was then cleared and a number of trees were removed, working closely with the Local Authority Landscape Officer, Ravenscroft Homes have agreed a replanting schedule to ensure suitable species are reintroduced.

Works on site began in November 2012, with Ravenscroft Homes hoping to complete the scheme in December 2014.

The site consists, of six executive detached houses all with generous south facing gardens and enviable internal specification boasting under floor heating to the ground floor, solid oak staircases, Nolte German kitchens with German appliances, contemporary Roca bathrooms and Porcelain tiling, the Show Home has recently been featured in Utopia Kitchen and Bathroom Magazine highlighting the exceptional quality and design of the kitchens and bathrooms.

Polished chrome sockets and switches throughout and satellite TV dish and wiring will ensure both the look and practicality of the properties will not be found wanting.

The four and five bedroom houses have all been designed with families in mind with generous proportioned rooms and the ability to further increase the floor area by utilising the attic space allowing for the potential of a further two bedrooms in each property, Ravenscroft Homes have also made the provision for the future attic space being used by installing fire doors throughout the houses.

Externally, the properties are finished with Sterling Grey KRend and stone cladding to the front elevations in keeping with the grey PVCu framed windows, demonstrating the contemporary finish inside before the front door has been opened.

All properties will benefit from PV Solar panels which will reduce electricity bills together with highly insulated walls, floors and roofs; ensuring that running costs are kept to a minimum.

While four homes are complete and three handed over, Ravenscroft are currently laying the foundations for units five and six. Each of the homes is unique using five brand new designs, and includes tailor made elements for the future home owners.

“At Ravenscroft we never do the same thing twice, we try to make everything bespoke and give our customers options.”

The construction process has presented the company with a number of challenges including the arrival of snakes on site from the nearby Zoo and ground levels requiring deeper foundations and soakawys in the rear gardens.

Such is the success of the property development project, Steve Martin, Site Manager, has been awarded an NHBC Pride in the Job Award for working on Briarswood.

“An NHBC Pride in the Job Award is about as good as it gets for the industry. To be recognised for our work by such a prestigious awards base is a reassuring pat on the back for Ravenscroft and I look forward to the end result of the project.”

However, Steve believes the award is deserved by the entire team working on Briarswood. He added:

“You can have the best site manager in the world on a project but without the team the project wouldn’t complete, I wouldn’t have been able to complete without the work of everyone else at the company.”