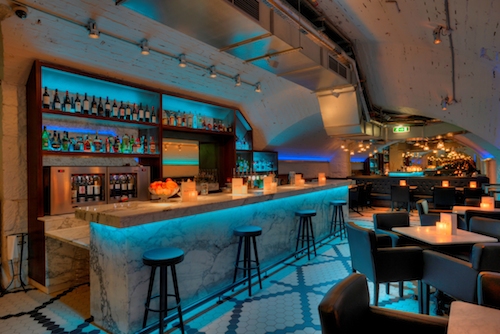 The site is operated by privately owned pub, bar and restaurant specialists, Glendola Leisure Group and serves the best cuts of Scottish beef.

At Alston Bar & Beef there is a choice of menu including an a la carte and a set menu, as well as a graduation menu for those who have passed University. The menus offer a range of delicious starters, mains and desserts such as smoked mackerel paté, a selection of fresh-cut steaks and pear crumble.

Architectural and interior design practice Jestico & Whiles worked in coordination with Echo Chamber, a retail trend consultant who assisted Glendola Leisure in defining the Bar & Beef offering. This played a crucial role in defining the references for the interior design, branding and visual identity of the business, which were all developed and delivered by Jestico + Whiles.

Construction work began on Alston Bar & Beef at the beginning of the year with, London based contractor, Phelan, delivering the interior designs developed Jestico & Whiles. The international interior design practice also worked in coordination with local Scottish architects, J.A.Leask who assisted in securing local permits and the ongoing delivery of the project.

Premier Hospitality caught up with Architect Jack Rugg, of Jestico & Whiles, to find out a little bit more about the new restaurant and bar. Jack said:

“The location of the restaurant presented a fantastic opportunity as it had the potential to capitalise on the constant flow of pedestrian traffic going into Glasgow Central Station, the second the busiest Network Rail asset outside of London.”

“One of the biggest challenges we faced on the project was that the original 17th Century station building is Category A Listed, therefore we had to sensitively engineer our new architectural interventions including a feature staircase which now allows the basement to become more active and accessible.”

Jestico & Whiles’ designs include an industrial, blued steel staircase studded with underlit lenses which descends into the station’s vaulted basement, accompanied by a soaring mural of overscaled native Scottish wildlife, magpies and hawkmoths. These interlayered illustrations produced by local artist Timorous Beasties capture the attention of those passing the station and define a route down into the previously derelict under croft.

The new venue also includes a gin bar, which sits alongside the main restaurant and offers customers a range of drinks. This natural division of the basement vaults into two spaces is characterised by their heights, with the lower vault becoming an intimate dining space and the remaining vault showcasing a number of fantastic design features including pendants made from reclaimed glass decanters and powerful star pattern mosaic floor tiles.

“It was an important project for us as it has followed on from recent successes at other restaurants including Aquashard in London.”

“It was extremely rewarding to work so closely with the operator both in developing their brief and delivering the best product possible.”