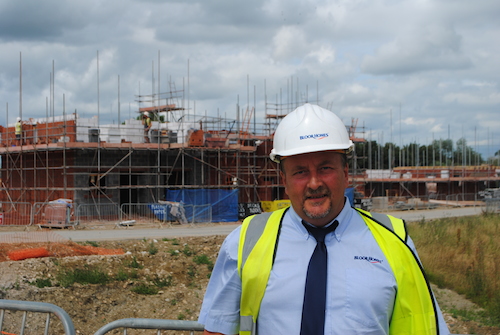 A project set to create 134 new houses, situated in Cheltenham, is well underway with 77 of the properties already occupied.

The Orchard site is Bloor Homes’ newest development and began in late 2012 in a bid to solve the need for housing in the area.

Eager to find out more about the site we caught up with Kevin Baldwin, Site Manager at Bloor Homes, who is overseeing the project. He said:

“The project involves the construction of 125 units and a new addition of nine bungalows on site. Demolition works began at the end of 2012 and we are aiming to complete the whole site by January 2016. The 134 units do include some social housing for the local area but predominantly we are constructing private properties comprising three, four and five bedrooms.”

Bloor Homes, as well as being the site owner and developer, also act as the main contractor and architect on the project as they have an extensive and highly skilled in-house team. Any tasks they cannot undertake they subcontract out to local trades people.

Phase one of the project will be completed by the end of August this year and the team are already well under way with Phase Two. This includes the construction of 45 four and five bed houses, from  Bloor Homes new house range; as well as building new roads and a Mugga area over the site’s newly constructed bridge.

After the completion of Phase Two, and the construction of a new, zero carbon community centre due to be completed September 2014 overseen by site manager Kevin Gunnell of Bloor Homes,  containing a small spots hall, outside Play area and community shop, with mini bus for local residents overseen by the parish council the project will be finalised.

A traditional four bed property on the phase one site contains a large open plan kitchen and sun room space which leads out via patio doors to the back garden. A utility room, study, lounge and cloak room can also be found on the ground floor. Upstairs the four bedrooms are situated, with the main bedroom comprising built in wardrobes and a luxurious en-suite.

Kevin added that the site has been quite challenging:

“We have had to do a lot of demolition work and remediation works as the land is a Brownfield site. Archaeological digs also had to be undertaken as there was an old moat in one corner of the site, as well as a large lake at another location on site. Due to the lake, ecology works were also undertaken to drain it and remove the wildlife this included the re-homing of a large Badger set.”

Despite the challenging nature of the project Kevin has recently received the LABC Warranty Regional Site Manager Award for the West of England for his works on The Orchard site which is he is overjoyed at. He commented:

“I am really pleased to receive the award; it a great accolade for our hard work and is also a good morale boost for everyone involved. Overall this LABC win acts as great recognition for Bloor Homes and above all the site team.”