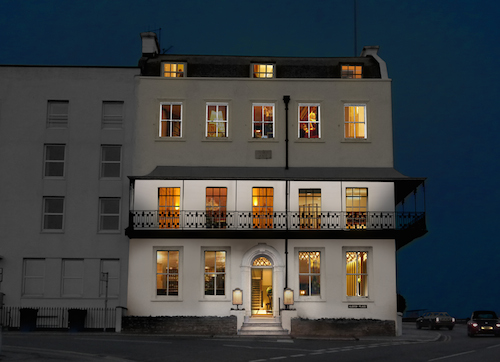 Work to transform Albion House in Ramsgate into a 14-bedroom hotel is nearing completion.

The project is being overseen by property investment specialists Field and Stone, which is led by husband and wife team Ben and Emma Irvine, and involves the restoration and refurbishment of an 18th Century building.

When the hotel opens, as well as its stunning bedroom collection, the hotel will also include a large bar designed to accommodate both residents and non-residents. A restaurant is also planned to become a feature of the hotel in the future.

“The building was built in 1791 and for the last 100 years has been owned by the council. We completed the purchase for the building in November 2013 and that’s when we began a soft strip out of the site.”

Work on the project has made great progress and is currently scheduled to reach completion in September 2014. Haptic Architects is providing all architectural services on the scheme, whilst Daniel Gent Construction is the main contractor on the project.

During the strip out process the construction team uncovered some of the building’s original details. Where some of the original decorations have been partially destroyed all efforts are being undertaken to sensitively restore these features so that the building can retain much of its original character.

During the works the building’s existing windows are being replaced with new thermal efficient sash windows, cast iron radiators are being retained and the acoustics are being improved utilising Knauf Brio. Knauf Brio is an engineered gypsum flooring panel and is specially designed for use in new or refurbished buildings.

A new plant room capable of containing 1,000 litres of hot water storage is being installed into the building, along with an air handling unit. Meanwhile, an area in the lower ground floor is being transformed into a fantastic new wine cellar.

“We have been involved with this project for four years and from the moment we had the idea of transforming Albion House into a hotel it has remained an extremely important project for us.

“We believe in preserving and conserving amazing buildings and we are very much invested in this area. We are passionate about delivering a building where people can come and enjoy themselves and we look forward to opening the hotel.”