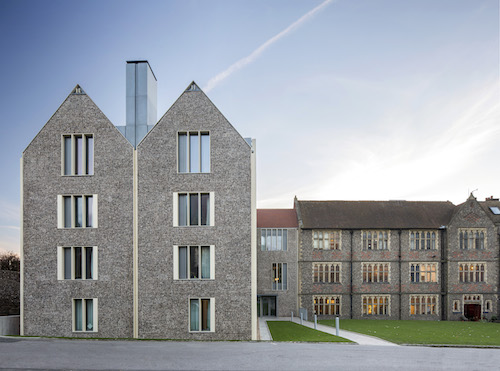 Brighton College is one of Britain’s leading boarding and day schools, providing education for boys and girls from the ages of three to 18.

The college is located on Eastern Road, Brighton and over the years has seen a number of Britain’s foremost business, professional and political leaders pass through its doors.

In February 2012, following a surge in boarding numbers at Brighton College the decision was made to construct a new boarding house which could provide 72 new beds. Construction work officially commenced in October 2012 with McLaren Group as the main contractor and Allies & Morrison providing all architectural services.

The new boarding house covers an area of just under 2,000 sq m and was designed to remain in keeping with the original buildings that surround it – a series of buildings built in 1880. The boarding house includes a mix of brick and flint elevations, with powder coated aluminium windows.

Internally the building includes bedrooms, office spaces, common rooms and apartments for the House Mistress and Deputy House Mistress. The building is extremely insulated and has achieved a BREAAM rating of Excellent.

“The biggest challenge was the time frame as we needed the new facilities to be completed and ready for use by September 2013. It was a tall order, but we put together a team of consultants and I made it my mission to get the work completed as planned. The result was that when 72 girls turned up in September they were able to move in straight away.”

“All of the work was conducted whilst the college was open because Brighton College never closes. We have summer students and boarders all year round, so McLaren had to work around everyone and they did extremely well, working very efficiently to get the job done – they were a very considerate contractor.”

Not only has the project provided Brighton College with fantastic accommodation for students, it has also picked up two RIBA Awards – a national and regional award – as well as Client of the Year.

“Brighton College is in the process of building a master plan to revamp the college. We have built five buildings so far, with another set to finish at Christmas and one more to get underway in September. To win RIBA Awards demonstrates that we are choosing the correct architects and to win Client of the Year, for a second time, shows us that we are doing a very good job. I’m very proud to have been a part of this process.”