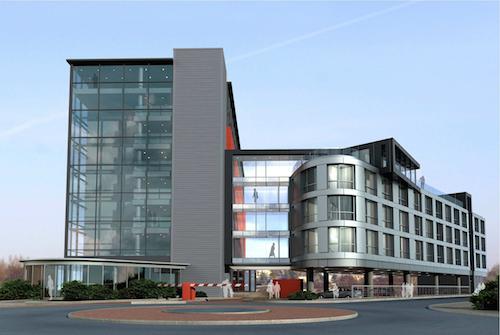 The £7 million initiative has seen a four storey extension constructed adjacent to the existing building, an additional 75 bedrooms created, a seventh storey added to the original building, as well as all public spaces receiving a major refurbishment.

Premier Construction caught up with the hotel’s General Manager, Aman Dubey, to find out more about the project. He told us that the works were split into two projects with the main contractor Tolent Construction working alongside ICA Architects for the new bedrooms and new meeting rooms and Boston Interiors working with ADS Design to produce the new open lobby.

The reasons for the renovation are twofold; there was high demand for rooms and the hotel needed to break a rate ceiling that was entrenched in the property.

Works began on site in October 2013 and the team initially started with new bedrooms construction. This was followed with creating the open lobby. ADS Design acted as the lead designers during the renovation of the lobby which now showcases a new server area, a new bar and a contemporary reception area. The space also contains interesting artefacts which are scattered throughout, as well as a new media lounge and popup lounge which are ideal for small meetings and also for families to get together.

The open lobby flows into the newly renovated restaurant making the venue’s ground floor much more spacious. The open lobby is truly multi-functional containing a selection of high and low level seating for all guests; those having their meals can chose from a variety of seating options including the new peninsula seating at the bar. The new design also allowed for total seating to be increased to ensure all guests can be adequately accommodated.

The project has also involved the creation of a seventh storey to the existing structure which now boasts of 27 new Executive bedrooms, all of which offer stunning views of the London skyline. The executive rooms have been designed by ICA designers and give a spacious and luxurious feel. The existing bedrooms were also revamped as part of the renovation project. Following the completion of works the hotel will house 225 bedrooms.

Two impressive new meeting rooms, named Skyline 1 and Skyline 2, were another aspect of the rebranding process. Located on the fourth floor, the meeting rooms offer great views of the west end of London all the way to The Shard. Adjacent to the meeting rooms is an open air terrace which is ideal for private rental and parties.

General Manager Aman Dubey said that the project did come with its challenges:

“Adding a seventh floor to the building was challenging because of the noise considerations to the floor below, as well as dealing with the inclement weather. Also throughout the renovation process all rooms were live, trading with a heavy occupancy, so we worked around this by informing guests about the works before they came to stay. We also geared up the service tremendously which made up for the works and as a result we had very few complaints.”

Aman added that it has been great to be part of such an extensive project:

“We successfully rebranded as Holiday Inn London West in August 2014. It has been great to be part of the team which has gone through this transformation to become the leading hotel in West London. The support from Intercontinental Hotels Group (IHG) team has been remarkable. Now that we are nearly there it is indeed a great feeling to see the project successfully completed. The whole team associated with the project has done fantastically well and look forward to being a great hotel which our guests will just love.”