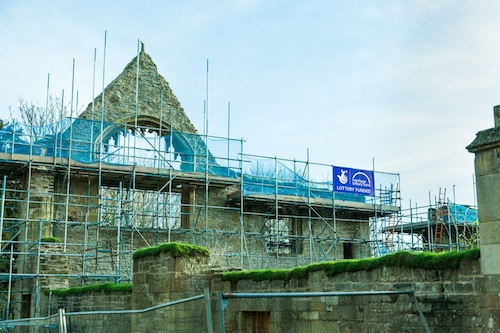 Southwell Minster is the Church of England’s cathedral in Nottinghamshire.

Adjacent to it, is a medieval former Palace of the Archbishops of York which, in recent years, had become somewhat dilapidated. Southwell Minster, as the owners, determined to address this.

Over the years Southwell Minister has retained its unique place in history; however the site has shown signs of deterioration. In order to restore and preserve the Minster, a project was recently implemented in order to give the site a new lease of life.

Their project – which was significantly funded by the Heritage Lottery Fund – comprised the restoration of the Great Hall, the stabilisation of the Palace ruins and the creation of a new education garden. In addition, accessibility around the site was improved with the introduction of a platform lift for wheelchair users and visually impaired visitors.

“In medieval times, the Archbishop of York required residences away from York and by common consent his most splendid outpost palace was here at Southwell. The palace was additionally used by many of the early medieval kings of England, as well as by Charles 1. It was also the final place of refuge in 1530 for the then out-of-favour Cardinal Wolsey. So, a building steeped in history.

“During the Civil War a large portion of the Palace was vandalised, but the Great Hall building survived intact. This project was designed therefore to restore the Great Hall, yet at the same time to stabilise the ruins; improving accessibility and introducing a new garden to complete the restoration process.”

Work began on the extensive refurbishment project in October 2013 and reached completion in August 2014. As the site includes both a Grade I Listed building and a Scheduled Ancient Monument all work was conducted sensitively on the project with North Midland Construction appointed as the project’s main contractor.

“The refurbishment brought about new challenges to our building team and enhanced our knowledge in this sector and the local area, after completing another listed building refurbishment project in Southwell to the high quality standards we set ourselves.”

With such an interesting history, the restoration of Southwell Minster was understandably very important to Charles and Patrick, as well as the rest of the team involved with this successful project.

“This has been the highlight of my career. I will not have a greater privilege than bringing back to life a building which has such history. The building played its part in the English Reformation and the English Civil War and King Charles the First used it extensively – you don’t get much better than that. We have made it accessible for future generations and we’ve made it a learning centre – it has been absolutely fantastic.”

“It was important for us to be involved in such a project, taking into account the Minster’s prestigious history within The Diocese of Nottinghamshire. North Midland Construction was delighted to be awarded this contract and be able to contribute to the Great Hall Minster going forward in its new life.”