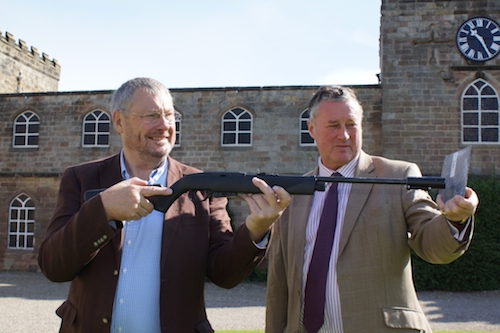 Trace in Metal Ltd was established in 2012 to develop a revolutionary way of indelibly marking metal and in particular lead sheet, a very attractive target for metal […]

Trace in Metal Ltd was established in 2012 to develop a revolutionary way of indelibly marking metal and in particular lead sheet, a very attractive target for metal thieves.

This revolutionary invention, which has been developed with the help of Swedish ballistics experts, allows metal to be tracked from roof top to melting pot. The company has works with installers who are members of the Lead Contractors Association, (LCA) and are now keen to grow their network of trained installers.

The Trace-in-Metal system, which has been designed by former West Yorkshire police detective, fires thousands of microdots into lead sheets, marking them with a unique identifying code, using an adapted CO2 powered rifle. The patented metal tracking system infuses thousands of nickel microdots into existing lead structures and has recently been installed at some prestigious sites.

In addition to being impregnated into the metal, the microdots which are almost invisible to the naked eye are also painted on to each sheet using an all-weather lacquer that shows up under ultra-violet light. Such is the science behind Trace-in-Metal, that even the smelting process cannot destroy the nickel dots and their unique tags.

“We have been developing this unique anti-metal theft device for a number of years, and after successfully trialling it on a church in Huddersfield, we are now launching it nationwide.

“I’m proud to say it is a Yorkshire invention that utilises Swedish ballistics expertise. It is totally unique and we believe will revolutionise the way valuable metal, in particular lead, is protected from thieves.

“Metal theft is big business and the Home Office estimates it costs the UK economy around £220 million a year. With resourcing being an on-going problem for police forces, anything that helps in preventing crime and saving police time must be welcomed.

“Although figures have eased lately, lead theft is still an ongoing problem, and some see specifying different roofing materials as the way forward. We want to counter that, by protecting lead in this comprehensive way; we can help keep lead on the roof.”

He added that by working in parallel with the legislation Trace-in-Metal provides much needed traceability of the metals, which will help the legitimate dealers to refuse to buy stolen metals.

“Our service will help reduce the number of outlets where stolen metal can be sold,” he said.

Ripley Castle owner Sir Thomas Ingilby Bt, who runs the Stately Home Hotline – which correlates and disseminates security intelligence to over 1500 UK heritage properties – said: “Lead theft is a constant source of concern to every owner of a historic building, be they stately homes, boarding schools, public buildings or churches.

“Trace-in-Metal is a very clever answer to an old problem, and one I’m sure that will be looked at seriously by the owners of historic buildings up and down the country.”

With metal theft unfortunately being a constant problem, the construction industry is continually finding Trace-in-Metal’s services to be a reliable and invaluable. Trace-in-Metal were approached by the Sir John Moore Foundation, after the 17th Century building became a victim of lead theft.

In December 2013, more than 16 lead ornate brackets and 20 meters of lead down pipe were stolen from the historic building in Appleby Magna. The foundation contacted Trace-in-Metal to secure the remaining metal assets on the building, most of which are irreplaceable.

The Sir John Moore Foundation was constructed between 1693 and 1697, based on an original design by Sir Christopher Wren and Sir William Wilson. The building of the school was financed by Sir John Moore, a local industrialist who made his fortune selling Derbyshire lead to the roofers of London. The school sits to the south of Appleby Magna and includes a Grade I Listed building, with Grade II Listed gates, gate piers, a wall and associated outbuildings. 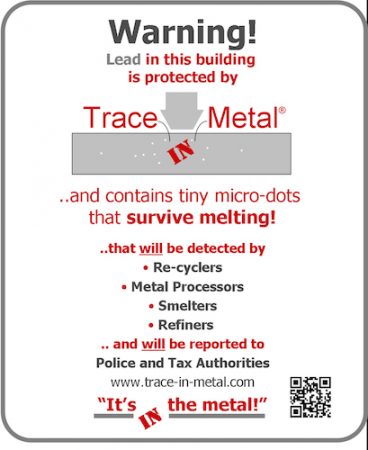 “By doing this, we provide a resilient marking system, that protects the metal throughout the metal recycling ‘food chain’. Because the microdots we use survive the temperatures used in the reprocessing lead, and can be easily collected and read, we can trace the metal back to the source, at each and every stage of the recycling process.

“The deterrent factor therefore goes higher up the food chain as well. Our system is very much aimed at removing the market for stolen metal, and because the Scrap Metal Dealers (SMD’s) know they can’t get rid of the markers, they will not be able to sell the metal on.

“To help with this, we sign up the local SMD’s as Trace-in-Metal detectors, and provide them with a deterrent signage. Indeed, we have developed a network of Police, SMD and local authority contacts, and following the Sir John Moore theft, we were able to broadcast the theft of the original lead to over 200 SMDs.”

Trace in Metal Sales Director Paul Batty, describing the installation at All Hallows said, “This is another good example of the Trace-in-Metal system protecting existing lead. By only using trained installers, we make sure that every installation is completed to a high standard.”

“As we continue to grow, we are now looking to expand our network of trained installers and resellers. We want committed people who have an interest in lead work to work with us to achieve this.”

Trace-in-Metal is actively recruiting roofing contractors to join their network of trained installers. The company offers a number of profitable packages to companies who can install and resell the system. Full training is given along with ongoing support and the installation applicators are provided on a loan basis.

For more information about the unique service that Trace in Metal provides, please visit: www.trace-in-metal.com. Or call 0330 2233014.