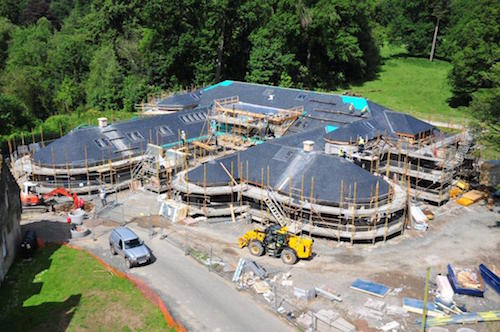 The construction of two brand new houses of specially built residential accommodation at Camphill Blair Drummond site is progressing well and is on schedule to complete by November 2014.

The accommodation will provide a home for individuals with disabilities as well as volunteers.

Each house offers space for seven residents and allows residents to be supported in an environment that allows them to fulfil their potential. The two new builds, named Parklands Houses, are set amongst the Camphill site which comprises an array of facilities such as other houses, gardens and workshops. Premier Construction caught up with Jason Glass, Director of Operations at the Camphill Blair Drummond site, to find out more about the project. David commented:

“As a charity we provide residential shared living facilities as well as run a residential community where people live and work. The two interconnected homes will provide accommodation for 14 individuals and have been designed to fit in with the other Victorian properties on the site. The houses lie adjacent to an old Victorian mansion house which was built in the 1850s and so the new builds feature turrets and circular walls and have been constructed using stone and larch.”

The land the houses rest on lies at the edge of the five acre estate and was purchased from a local landowner. In both houses the general living accommodation including the lounge, kitchen and dining room are situated on the ground floor, as is connected accommodation for three people with more complex needs. On the first floor there is slightly more independent living accommodation.

The buildings have been constructed to a high standard and boast large open spaces which create the sense of a family home. The properties also contain large homely halls as well as open plan kitchens and large living rooms with space for 15 people; all these facilities encourage family living and create a homely environment.

The main contractor on the project is Ogilvie Construction who has worked alongside Macduff Architects. Both firms have worked with the Camphill Blair Drummond trust previously on other projects on the site and so the team worked well together.

The teams were able to fix any problems encountered on previous builds and so this project has been more successful due to the longstanding working relationship between all three groups. As well as this the weather has remained bright during the construction process.

“I joined this charity seven years ago and we have so far raised over £7 million in the last six years, out of a target of £10 million. Being able to see that money being spent on new houses and workshops creates a real sense of shared satisfaction. It is lovely to build a home that’ll change people’s lives, as well as to sit back and appreciate everyone’s contribution to the creation of those homes.

“This is a special place to work as it allows us to build a caring, homely environment for people.”