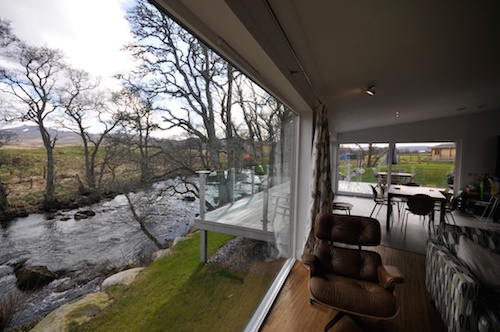 A post office turned tearoom, the restoration of a distinctive copper bath and a revamped country park are among projects to have been honoured in the Aberdeenshire Design Awards 2014.

The awards, organised by Aberdeenshire Council, are held every two years to recognise local projects demonstrating ‘exceptional merit’ in their execution.

The schemes were assessed in seven categories: Landscape Design, Business, Public Art, Sustainability, Craftsmanship, Conservation, and Housing. The awards themselves were announced during an evening ceremony within the library of Haddo House, Methlick, on Thursday, September 4th.

Taking the top honours for 2014 was Fasque House, Fettercairn, which was awarded two distinctions and a memorial award.

The first distinction was for The Apple House on the estate. The conservation project, undertaken by @rchitects Scotland Ltd, was described as ‘a superb restoration project using traditional skills and materials to facilitate the 18th century building being used for a new commercial usage.’ The structure also secured The Ian Shepherd Awards, in memorial to the council’s former principal archaeologist Ian Shepherd, who passed away in 2009.

Fasque was also recognised with distinction for a striking fixture within the estate house under the Craftsmanship category – a distinctive copper bath and canopy that is now back in working order.

The project, undertaken by Catchpole & Rye from Kent, was described as: “The exceptional restoration of a John Bolding & Sons copper bath and canopy which once again sits fully operational in Fasque House.”

A further 21 projects across the various categories were also recognised with Commended and Highly Commended honours.

This year’s judging panel for the awards comprised council officers, elected members and Bruce Balance of the Aberdeen Society of Architects.

Judging panel member and Aberdeenshire Council’s Director of Infrastructure Services, Stephen Archer, said: “Once again, we have seen a fantastic selection of entries to the competition, representing the very best of architectural and craft projects being undertaken in Aberdeenshire.

“Often these are the ‘hidden gems’ of Aberdeenshire and in a number of cases are preserving historic structures for future generations or are setting high standards for modern properties which fit perfectly with the local landscape.”

The Aberdeenshire Design Awards will return in 2016, with nomination forms available from October 2015. In this month’s issue we take a look at a number of projects, including Crommey Castle and The Apple House.