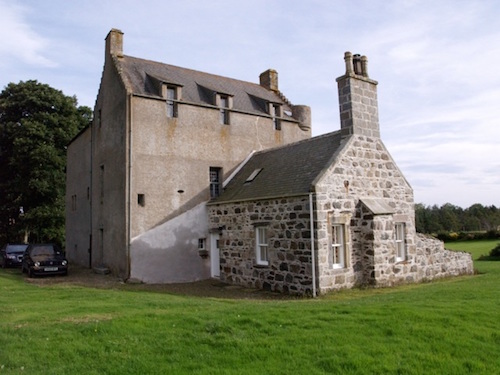 External conservation work carried out on an early Scottish towerhouse which is being expertly refurbished to create a private residence, has been commended in the Aberdeenshire Design Awards.

The project is being carried out at the Grade A listed Crommey Castle near Aberchirder. Crommey Castle is a three storey L-plan towerhouse erected in c 1542 by John Innes of Crombie.

The building was extended in early part of 17th century and converted to form a U-plan layout with later additions and modifications. The original tower is three-storey on an L-plan and the building incorporates lower gabled additions of circa 1570; 1820; 1860 and 1910.

The current design award recognised the project management skills of architect, Leslie Hunter Architects, as well as the exceptional standard of workmanship carried out in the external works on the scheme – particularly in the application of lime render to the building’s exterior by subcontractors Masonry and Lime of Elgin.

Originally the external elevations were covered in inappropriate cement harling, which was removed to make way for the lime render, revealing the original stone masonry together with previously concealed shot holes, arrow slits and sealed windows – all of which were recorded, re-opened and glazed.

The east gable of the building, which formed the back of the main kitchen fireplace had begun to bulge and various structural works were required to remedy this. In addition, the whole building was lime pointed before it was re-rendered.

One of the most challenging elements of the external works element of the project was the constraints imposed by the building’s listed status, which meant that multiple planning applications were required as the work advanced – for example when the project team discovered various sealed openings beneath the cement render.

“It’s always nice to have work recognised and this award commends the work of the whole team on this scheme,” Leslie Hunter commented to Premier Construction. He added that the current award is one of many Aberdeenshire Design Awards received in past by the practice.