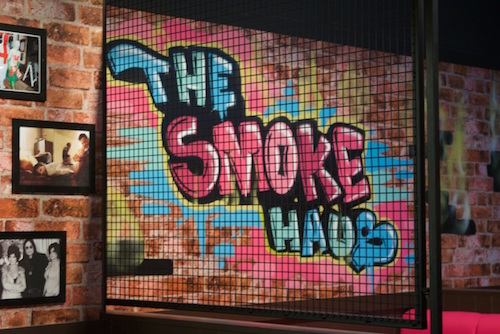 The Smoke Haus – a 6,000sq. ft. 200-cover American-style restaurant serving huge portions and themed as a ‘Man v Food’ venue – has recently opened in Cardiff following a project described as “a joy” by the client.

Located at the former Hooters premises on Mary Ann Street, this is the second venue for The Smoke Haus, with the first already a success in Swansea since its debut two years ago.

Specialising in BBQ ribs, burgers, steaks, sandwiches, pork and brisket and foot-long hot dogs, The Smoke Has was established by managing director Mark Power who has spent 20 years working in the catering industry and has travelled around America where meat and barbeques are hugely popular.

Speaking of the work to create the new restaurant within the old Hooters premises, Mark told Premier Hospitality:

“The transformation has been absolutely fantastic – the difference has been phenomenal – I am absolutely delighted.

“The restaurant’s theme is very much inspired by my time in America and my love of the food there, which has now become massively popular in the UK. Luckily were a little bit ahead of the game when we opened up in Swansea two years ago.

“We were very lucky that Hooters was also an American themed restaurant and the large size of the venue and the type of kitchen and the equipment already installed in there therefore readily lent itself to becoming The Smoke Haus. The customer area was completely re-designed, a new bar was installed in a different location and a large area of raised seating was added.”

The design and colour scheme was inspired by a recent trip to America by Mark and includes lots of dark wood and mood lighting, with iconic local images on the walls. “We have tried to be earthy and rustic – very much ‘rib shack’ in our approach”, he said.

The restaurant frontage was completely transformed with new seating, railings and signage.

Mr Power says that the Swansea-based Smoke Haus has been extremely popular, with its huge portions and masses of meat, hence his decision to expand the brand to Cardiff.

There is also the infamous 666 (hot wing) challenge, where customers are dared to eat six spicy chicken wings in six minutes, with a six minute after burn.

“The creation of the Smoke Haus brand has been a real labour of love. When we first opened in Swansea, I didn’t have a great deal of money to spend, I just had an idea regarding the food I wanted to produce. With the new venue I had more money to spend and have enjoyed seeing it evolve over the duration of the contract. I am extremely proud of it” said Mark, particularly commending the work of shopfitter Dave Sparks of Pro-Spec on the scheme. “His precision and attention to detail was incredible and the project was just a joy for me” he added.

One of the Smoke Haus’s most famous dishes is The Mixed Grill, a silver platter with brisket, Smoke Haus pulled pork, pastrami served with a ‘Haus chilli dog’, full rack of pork sheet ribs, a large portion of skin on fries and coleslaw. A more locally themed favourite is the Pulled Lamb Hoagie – A slow roasted shoulder of Welsh lamb, pulled and served in a hoagie with crisp lettuce, dry slaw, sweet sauce and a mint salsa.

Pro-Spec Interiors Ltd is a shopfitting specialist providing services to the hospitality and retail sectors. The company has been in operation since 2004 and conducts a considerable amount of work on pharmacy fit-out projects.

“I met Mark Power on a skiing holiday and I’ve never met a man so passionate about his restaurant and so focused on opening a new site in Cardiff – I knew I had to get involved. We started talking to designers but Mark was very clear on what he wanted, so I involved a CAD drawer who completed the flat plans and then I completed the line drawings for all the elevations.”

This has been a very important project for Pro-Spec Interiors Ltd, as explained by David:

“I wanted this in my portfolio as it is just a fantastic brand that is expanding into all the university cities on the M4 Corridor. Bristol is already in his sights, and working on this project I have made a new friend as well.”

When asked what Pro-Spec Interiors Ltd prides itself on, David said:

“As a company it is always about the finish and the client’s requirements; we will move mountains to ensure the work is correct. I want the company to stay a manageable size so all operatives feel as if they are part of the company and they are all part of the superb finished product we produce.”