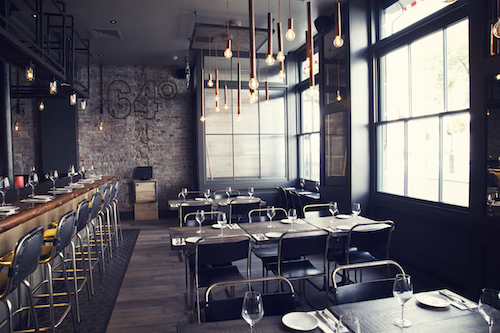 64 Degrees has settled into its new home in Pimlico, London and is set to continue its informal dining experience which was initially pioneered in Brighton.

Chef Michael Bremner was keen to create a restaurant where the chefs could interact with the diners instead of working in a dingy, hot kitchen, which is a familiar environment for many chefs.

Working alongside Niche Interior Design, Michael created a venue in Brighton where the majority of the kitchen is located in the restaurant and so allows guests to interact with the chefs, as well as watch their food being prepared in front of them.

The Brighton branch was a big success after launching in September 2013 and so works began to create the second 64 Degrees in April this year. 64 Degree owners Michael Bremner and Carla Grassy have teamed up with the owners of Artist Residence, a boutique hotel company, on this project. Justin Salisbury and Charlotte Newey have established a ten bedroom boutique hotel in the building in Pimlico and the ground floor houses 64 Degrees.

We caught up with Caroline Wright, Creative Director of Niche Interior Design, to find out more about 64 Degrees which opened mid-September. Caroline said:

“We first became involved with 64 Degrees after Michael Bremner contacted us after seeing other restaurant projects we have completed in Brighton. The design brief from the client was to make the venue a great place for chefs to work and he gave us free reign from a design point of view.

“We wanted to keep the design details simple and the materials pared back so that the theatre of the open kitchen was the main focus.”

Design works began on the London branch in April 2014 and construction works on site started in July. The site was previously a public house but had stood empty for some time. After an extensive renovation process the stripped back venue now contains concrete walls and bar front, weathered timber flooring and weather timber tables, as well as 3 impressive copper piped chandeliers.

The use of copper highlights warms up the industrial space no end and highlights the venues high ceilings. The large copper chandeliers dominate the main dining space as does the large copper-clad bar situated in the centre of the space.

The restaurant comprises a mix of seating including bar seating, industrial tables as well as booth seating. Peppermill Antiques was responsible for providing 64 Degrees with iconic vintage stacking chairs for the main dining areas, to compliment the industrial setting.

“Having started in the antique business nearly 20 years ago, and now specializing in industrial-style vintage and reproduction furniture, at Peppermill Antiques we pride ourselves in providing our customers with quirky, original pieces, whether it’s for a new bar opening, or to flatter any home interior. The 64 Degrees project was a key project, as it is always essential to network with interior designers, and work with new restaurant openers, broadening our customer base and expanding our business.”

The kitchen at 64 Degrees serves small tapas-style plates comprising a changing menu which focuses on seasonal ingredients which are locally sourced if possible. The venue suits those wanting to pop in for a few plates and some drinks, as well as diners wanting to come and sample most of the menu.

The London branch has 48 covers and so is double the size of the Brighton branch. The venue lends itself to communal eating as well as providing more intimate booth seating; the atmospheric space welcomes diners from all walks of life and is set to be as big of a success as the Brighton branch.

Ashbridge Building and Maintenance Service Ltd acted as the main contractor during the Pimlico project, undertaking extensive construction works for both the hotel and the restaurant. The space in the restaurant was stripped out completely and reconfigured; additional kitchen areas were also constructed at the back of the space.

“It is very exciting for us to be involved and work with Michael as he is very forward thinking. He wants to break the boundaries with his food as well as his restaurant and so from a designer’s point of view this was very refreshing for us.”