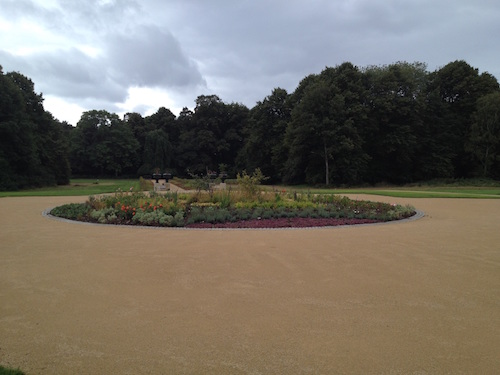 Over £5 million was invested to bring much needed physical improvements to the community facilities and landscape, making it a park fit for the 21st Century.

Alexandra Park was designed in 1868 by Alexander Hennell and was opened to the public in 1870. However it had become extremely run down by the 1990s.

The project was carried out for Manchester City Council by Balfour Beatty, as Main Contractors, and URS as Lead Consultants (landscape architecture, engineering and CDM coordination services, with conservation architecture provided by Purcell).

£2.2million was awarded by the Heritage Lottery Fund (HLF), and this was match funded by Manchester City Council, with further funding provided by the English Cricket Board, the Lawn Tennis Association and Sport England.

The park remained open during the works, with temporary closures to parts, and fully re-opened to the public in August 2014.

The scheme included the restoration of three existing buildings – Chorlton Lodge, the Pavilion and the Depot.

New facilities have been added in the refurbishment of Chorlton Lodge, with these including new community rooms for meetings of various groups including Friends of The Park. The building also incorporates new offices for Manchester City Council staff and an exhibition area.

The Pavilion has been refurbished and extended, with the rear of the building opened up to overlook the lake. New facilities include changing rooms, a kitchen, space for a cafe, a community room and storage. New changing rooms have also been created within the Depot building.

The general infrastructure of the park has been substantially upgraded with massive amounts of new planting including trees, shrubs and flowers and many other features designed to reflect the original Victorian layout. These include pathways around the park’s southern and northern oval lawns; the restoration of the Lime Walk located down the west side of the park; the refurbishment of the North terrace which has a wide raised pathway with planted beds to either side, and the upgrade of Favourite Walk, which runs perpendicular to North Terrace. A drinking fountain and tabernacle were also restored.

Extensive works were carried out to the edge of the park’s Serpentine Lake, which had to be drained before these could commence. The works included the laying of new stone edging and access for fishing, as well as the formation of a new gated education area. Extensive new planting was also carried out along the periphery of the lake.

A completely new play area for toddlers has also been formed in the centre of the park.

“In terms of feedback from the public, the project has been very well received. The park has been opened up visually, making it feel very safe and that is one of the things which the public like,” Jane Ash of URS told Premier Construction.

“Alexandra Park is at the heart of south Manchester – being well loved across the city and is well used by residents in Whalley Range, Moss Side and Hulme. It has undergone a miraculous transformation.”

HPC Ltd provides high quality and innovative solutions to a range of problems found when renovating historic buildings and structures.  It offers these services to contractors, local authorities and private clients.

Most recently the firm has been involved with the project to renovate Alexandra Park in Manchester. The firm was responsible for the restoration of the ornate cast iron drinking fountain which involved the careful labelling and dismantling of the fountain for transfer off site to a workshop.  The components were then cleaned to remove old paint layers and corrosion before necessary repairs was undertaken.

The restored fountain was repainted using a high quality paint system to give maximum protection from future deterioration.  In addition, HPC Ltd manufactured 18 no new replica cast iron planters for the park.

“It was important to be involved with this project as the fountain was listed and an important historic feature of the Park.  HPC Ltd had the right knowledge, skills and expertise to ensure it was sensitively restored retaining as much original material as possible.  The latest treatments were used to minimise further deterioration.”