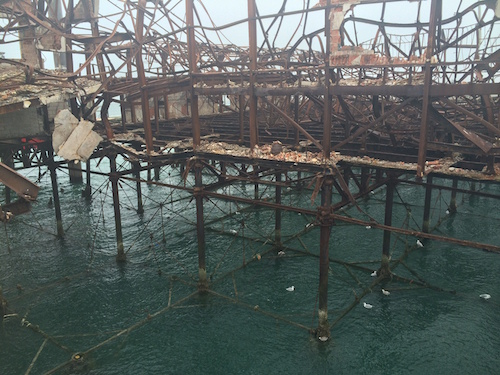 Works to reconstruct Hastings Pier are progressing well with the project currently due to complete by the summer of 2015.

The pier once operational will create 45 direct jobs and 10 apprenticeships as well as bringing £1.2 million to the local economy.

The 910 foot pier originally opened in 1872 and since then has been continually expanded to include a large pavilion, West View and East View Solaria and an amusement arcade. Over the years the pier has been significantly damaged due to bombing in the Second World War and frequent storms and wind.

In July 2010 Hastings Borough Council pursued a Compulsory Purchase Order for the pier. By March 2012 the council had been granted this order which would allow the pier to be handed over to local campaign groups eager to stabilise and repair the structure.

The Heritage Lottery Fund has awarded £11.4 million to the £13.9 million scheme, which is now being run by Hastings Pier Charity. Works began on the pier in December 2013 and by the time the project is completed will see the restaurant and visitor centre renovated as well as a new digitally enabled heritage experience installed throughout the pier.

Premier Construction caught up with David Spooner from Hastings Pier Charity, who is the Project Manager, to find out more about where works are up to. He told us:

“The project is approximately half way through; a large proportion of the works involved repairing the steel structure of the pier which equated to £7 million of the overall works. We are also replacing the entire piers decking as well as creating new balustrades and renovating some of the existing balustrades.

“Shortly we will also demolish the remains of the old ballroom, situated at the pier head, which was severely damaged by a fire in 2010. The remaining 400 square foot building at front of the pier will be refurbished and transformed into a restaurant. Finally a new building is being constructed which will house a visitors centre, an education centre, as well as a kiosk bar on the roof.”

Hastings Pier Charity have been acting as a coordinating body throughout the project, in order to avoid the need to hire a main contractor, employing an engineer and seven contractors to work on the site. The on site team have encountered a number of challenges especially as most of the works being undertaken involve workers hanging from the deck in order to repair the steel work.

David said that the nature of the work means the team are very aware of the weather as they are working over water. Some of the work has also had to be undertaken from the beach meaning that the team have to work around the tide.

As the pier is 140 years old the team uncovered a few unwelcome surprises where the structure was not in the condition they had hoped for. In February this year a bad storm left the structure at the end of the pier badly damaged meaning more had to be replaced than originally planned.

Despite the challenges David said the new pier is going to bring an awful lot to Hastings, he added:

“The pier had been out of use since 2008 and so is something local people are very supportive of. It is thought of as a catalyst to the regeneration of the town and the Hastings’s environment. The new pier will provide employment for many as well as a new tourist attraction which will bring more people to the town.”

Personally the project means a lot to David:

“I have been in this industry all of my life and am now coming to the end of my career. The plan is that I will finish this project and then retire and I can’t think of a better job to be involved in to finish my career. It is extremely worthwhile and to leave this behind is very rewarding; I live in Hastings and so I will be able to sit on my deck chair at the end of the pier and look back at what I’ve achieved.”