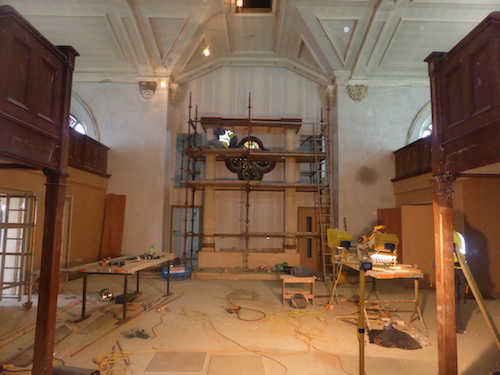 A former church which is a Listed Building and had stood derelict for 30 years is nearing the end of a dramatic transformation to provide a brand new service as a distinctive community centre, with a whole host of facilities.

St Patrick’s old church in Claudy, Londonderry is undergoing a wide-ranging programme of refurbishment and conversion which has won commendation for the performance of the contract team.

“The scheme is going well and we are pleased with the work which is due to be completed this October or November,” said  Mr Philip O’Kane of scheme funders Rapid NI.

Works within the building included a comprehensive initial strip out and the creation of a complete new interior. This comprises a community space, kitchen facilities, meeting rooms and toilets. New partitioning overlaid with feature tongue and groove boarding has been installed to create the new layout, with the same boarding also being installed behind the altar area. The building has also been re-plastered, re-wired and comprehensively re-decorated. New lighting, and new surface-tiled sandwich concrete flooring has been installed, together with a new heating system.

The church is cruciform in plan and tiered seating on mezzanine level balconies on the left and right wings of the building has been removed and a new floor installed in these areas, with the staircase and balustrading leading up to them being retained. The mezzanine areas will now provide storage space.

The building’s Listed status has provided a number of challenges said Project Architect Mr Eoighin Farren of Farren Architects, who told Premier Construction: “Many elements had to be retained, restored or replaced ‘like for like`. All the works were carried out in close consultation with the Northern Ireland Environment Agency – The Historic Environment Division of which is responsible for the conservation of the built heritage (monuments and buildings) in Northern Ireland.”

He said that additional works on the project include the removal of the building’s external sand/cement and plaster render which acted as a water membrane and did not allow water penetration from external elements but also trapped any water retained within the walls. This was replaced with lime render which allows the walls to breathe.

Lime render is porous and allows the building to ‘breath’ or release any moisture retained within the walls. The original stained glass windows have been removed, refurbished and replaced and the mouldings on the bell tower, which were in a poor state critical condition, have been replaced with exact reproductions. The building has also been completely re-roofed. A large percentage of the roof timbers and roof slates have been restored and repaired.

“JPM Contractors have done a superb job and are very meticulous in their work,” added Mr Farren.

In 1817 James Ross gave the site of the former St Patrick’s church to Father McFeely PP of Claudy, on which the latter built the first Saint Patrick’s Church at a cost of £500 with the building estimated to hold 600 people.

The church was consecrated in 1820 and was roofless for several years until 1827, when Father Donnelly had it roofed.

Rapid NI (the Rural Area Partnership in Derry), consists of representatives from community organisations, statutory authorities, the private sector and special interest groups and its primary objective is: To halt the social and economic decline of the rural communities within the Derry City Council Area and to enable these communities, in partnership with all interested parties, to devise locally-led strategies to facilitate sustainable social, economic and cultural development.

The role of JPM Contracts Ltd in most projects is in the capacity of Principal Contractor on major commercial building contracts. JPM Contracts Ltd has amassed a wealth of expertise in areas such as refurbishments, new builds, listed buildings and civil engineering.