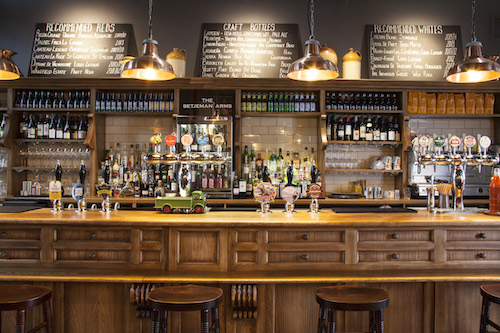 Founded in 1995 Geronimo Inns is a series of gastro pubs situated throughout London.

What makes Geronimo stand out from the crowd is individuality, meaning Geronimo is not seen as a chain, instead it is a collection of individual pubs with individual menus. The chefs and their teams at each Geronimo write their own menus, tailoring them to the tastes of the surrounding areas.

Keen to keep Geronimo at the forefront of the pub sector, Geronimo Inns has recently revamped its existing pub, The Betjeman Arms. Situated within St. Pancras International Station, The Betjeman Arms reopened to punters in September 2014, following an extensive renovation.

The pub marked its reopening with a #LoveYourCommute campaign, which is a month long multi-media initiative aimed at making travellers’ commute a little less tedious. In addition, The Betjeman Arms also held a London Ale Festival from 29th September until 5th October, which saw the pub pour its first 100 pints on the house.

“Geronimo has remained true to the intrinsic design of this remarkable station: this is an extensive piece of renovation on one of our pubs that just adds to the beauty of the station – a unique place to enjoy London’s architecture with a pint in hand!

“Geronimo has always understood that station pubs are places to reassure customers with consistently great quality, a splash of imagination and a smiling face. The travellers are not as twitchy as those in airports – checking their passport is still there – but the success of The Betjeman Arms has always been down to the fact that travellers are put at ease by the fact this is also well used by the local creative types. Long live fine pubs and pub banter!”

As with all Geronimo Inns, the design of The Betjeman Arms was completed by an in-house team – something rarely seen in the contemporary UK pub industry. Anneke Laux was the designer on the project and highlights of the new design include floor to ceiling windows, a re-designed internal terrace and a much larger bar.

“The new interior of The Betjeman Arms reflects the heritage of the iconic building it is set within. We have streamlined the layout and created a classic bar that is now the main feature and really promotes our vast array of drinks. The pub is a more cohesive space; the terrace is now very visible and sits well against the existing building fabric. We’ve matched the heritage red of the doors on our panelling and added tiles for a fresher look. The upholstered chairs and cushions on the panelling make for a more comfortable setting and is a seamless extension to the new pub interior.”

For a longer lunch or dinner the house favourite will be Camden Hells chicken, polenta popcorn and watercress salad. Alternatively a warming Cornish fish broth with summer vegetables or Betjeman sausages, Dijon mustard mash and scrumpy sauce are on offer, as is a selection from The Butcher’s Block including sirloin chop, cotes de boeuf, onglet and flat iron steaks. Puddings to entice a well-earned snooze on the Eurostar include sticky toffee pudding with salted caramel ice cream and chocolate tart with raspberry ripple ice cream.

The drinks menu has added to the thirst quenching beer list, with Camden Hells unpasteurised lager, London Fields Three Weiss Monkeys, Dogfish DNA, and a further range of bottled craft beers, wines and champagnes. During the weekend, those with slightly foggy heads can also enjoy a classic Bloody Mary at Geronimo’s ‘make your own’ stations.