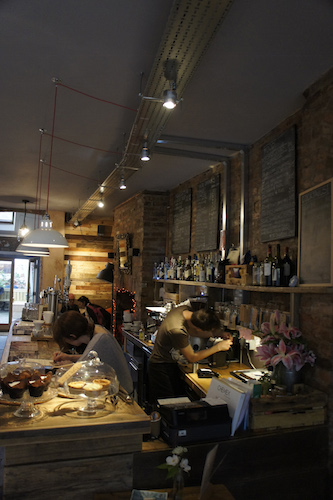 Fossgate Social, an intimate bar and lounge, has taken the York social scene by storm and has been adopted by locals as THE place to meet and socialise in the area.

Owned by brother and sister duo Michael and Sarah Lakin the venue had been completely renovated over a 10 month period and now boasts a luxurious holiday apartment as well as a new bar and lounge.

Sarah and Michael bought the building in October 2013 and have since converted the four storey building into a three floor holiday let and a 35 cover bar. Although the building was structurally sound the renovation project was an immense task for the onsite team because of the state of the building, which had stood unused for many years and as a result was very worn down and dirty.

The duo undertook all the works themselves and only involved a handful of trades’ people. Sarah Lakin undertook all of the design works during the project as she has her own landscape architect firm; Landscape Architects Ltd, which meant she could design, draw and take care of all the quantities needed. Michael is experienced in the construction industry as he has undertaken other property renovations in the past and so was confident dealing with the construction works.

We caught up with Sarah Lakin to find out more about the project. She said:

“The yard at the back of the property was head high in rubbish and there were mattresses in every room when we first got into the property. The space was structurally sound however and just needed cleaning. We were keen to create a stripped back aesthetic in Fossgate Social and so we have included a lot of bare brick walls, bare timber floors and honest furnishings.”

The first stage for the on site team was to strip everything out of the building and rid the venue of all the rubbish. The kitchen, situated toward the rear of the property, was completely removed and a large double doorway was installed which leads out to the garden at the rear. Guests can now see all the way through the bar into the courtyard from the front of the venue which acts as a great tool to draw people into the venue.

A new ceiling was also installed on the ground floor to insulate between the bar and the residential property upstairs. The fitted furniture located around the walls and on the bar as custom made out of reclaimed scaffolding boards. The venue also boasts impressive wire brushed wood panels dotted throughout adding to the industrial, yet cosy, feel of the space.

The venue is extremely small with a capacity of just 65 in total and since opening in April this year has been used as a central meeting point for local clubs such as the knitting and book club. Birthday parties are also a regular occurrence in the venue as are do open mic nights which utilises the venues newly installed PA system.

Sarah said that the team had to gain planning permission, as the venue is a Listed building, for change of as well as for all of the works they planned to undertake. There were certain restrictions during the project due to the buildings status which meant the team could not touch the properties façade or install any illuminated signage.

“This project has been ridiculously exciting; neither of us have worked in this industry before so it has been a steep learning curve for both of us. We have undertaken everything ourselves so we are very proud of what we achieved. It is very exciting that you can achieve your dreams.”

Rigg Ltd specialises in vintage industrial furniture; based in Birmingham the firm are passionate designers and makers of furniture. The firm makes and source materials locally and specialise in sharing their characterful pieces with clients far and wide.

Premier Hospitality caught up with Rigg’s Director, Kevin White, to find out more about the firms involvement in the Fossgate Social project. He said:

“We manufactured some of the venues tables and the interior wall panelling at Fossgate Social York. This project was important to be involved with as it demonstrates our pieces well, especially when located in a vintage style café with an alternative style interior. Our pieces are very in keeping with their style.”