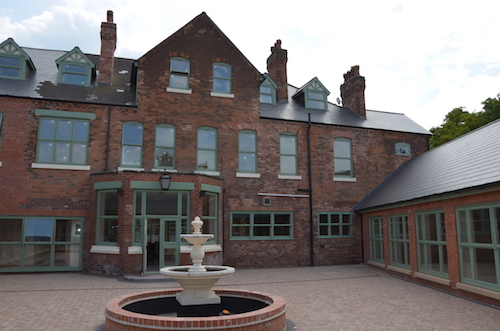 A project to give Aston Tavern in Birmingham a stunning new makeover has been a huge success. The project, which reached completion at the end of the summer, has completely rejuvenated the pub on Aston Hall Road.

The 1904 Aston Tavern has been renovated thanks to a joint venture between the Homes and Communities Agency (HCA) and the pub’s new owner and operator Chelle Property, run by entrepreneurs Michelle and Paul Monaghan.

The HCA inherited the site from the now defunct regional development agency Advantage West Midlands. The pub had stood empty for 20 years and the new owners are keen to create a Michelin-star standard venue. Located nearby Villa Park the venue was in dire need of attention and opened its doors on the 23rd August 2014 to coincide with Aston Villa’s first home match of the football season.

Chelle Property gave up their King Edward pub on Lichfield Road, which is now being demolished, in exchange for the Grade II Listed pub. The King Edward will be knocked down and replaced with a new industrial estate; the Aston Advanced Manufacturing Hub.

They are keen to make the venue a destination pub complete with a restaurant and bed and breakfast. The owners aim to serve visitors to Aston Hall, the business community and workers from the new industrial estate.

The owners are pleased to have been at the forefront of the regeneration of this historic property. The public house has been substantially extended enabling the owners to cater for Aston’s changing markets, the local community and visitors to local attractions such as Aston Hall, The Villa Ground and the Grade II Listed Aston Hall Church.

The venue comprises 13 bedrooms, self contained flats, a one-acre beer garden, outside bar, a bandstand, a restaurant and a Victorian tea room.

The project has been demanding as there has been an emphasis on restoring the historic elements of the building. The onsite team was able to rescue some features of architectural interest from the nearby King Edward before it was demolished.

The property has also been extended as part of the renovation scheme offering more diners the chance to enjoy the new facilities.

S L Brickwork acted as the main contractor on the scheme. The firm is a well established building company providing building and maintenance services across the UK. Services include all types of domestic and commercial building work such as new builds, construction works, as well as repair and renovation works.

The opening of Aston Tavern has enabled works on the Advanced Manufacturing Hub, which is expected to create 3,000 new jobs, to commence. The venue is located a short drive off the M6 / Aston Expressway close to Spaghetti Junction in Birmingham.

The venue is situated just a stone’s throw away from Aston Villa’s ground, Villa Park, as well as being close to the area’s community centre and Aston’s four star standard conference centre and hotel; Conference Aston.