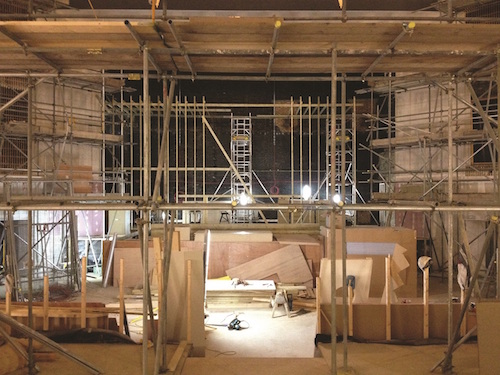 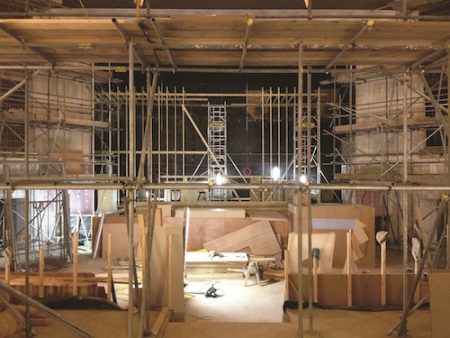 A landmark art deco cinema threatened with demolition has been saved thanks to a £2 million project to dramatically restore it to its former glory.

The previously neglected and derelict former Odeon Cinema is being restored to create the newly named Odyssey Cinema, in a project nearing completion in London Road, St Albans.

The project to restore the building, which has been described as ‘one of Britain’s most stunning art deco cinemas’ is being headed by James Hannaway, who previously led the campaign to restore The Rex in Berkhamstead which re-opened in 2004. He commented: “When it’s finished, it will be glorious.”

Main Contractors for the scheme are Procare Building Services; Project Managers are Robert Martell and Partners, and Architects are EHW, working with James Hannaway.

“This has been a very exciting and challenging project which has also generated a lot of local interest. It is going to be a really beautiful cinema when it is completed,” Sheila O’Flaherty of Procare Building Services told Premier Construction.

The cinema, formerly a four-screen multiplex, will become a 480-seat one-screen cinema, with two bars and a foyer, plus ancillary facilities.

The cinema was originally built in 1908 by Arthur Melbourne-Cooper, the son of a local St Albans photographer and at that time it was known as the Alpha Picture Palace.

It was destroyed by fire in 1927 and then re-opened as the Capitol Cinema in December 1931. It later became The Poly and The Regent and in 1945 it was bought by Odeon, who continued it as a working cinema until its closure in 1995.

Ever since, it has remained empty, with a steady campaign running to protect the building and see it returned to its original glory.

“Originally the cinema was going to be demolished to make way for flats, but local campaigners saved it,” said Sheila O’Flaherty.

“The building was very dark, very damp and infested with rats and pigeons when we came on site – it was fairly grim.”

Initial works included pest control measures, stripping out the building and the dismantling of the former multiplex’s massive steel frame, as well as making the building watertight. This included re-rendering the external elevations and re-roofing in a combination of single ply flat roofing and pitched roofing systems. 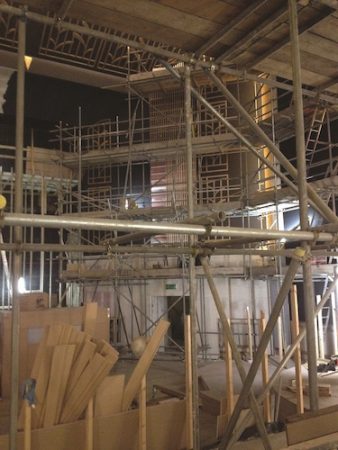 A massive scaffolding platform had to be erected internally to take down the original auditorium ceiling, which was considered unsafe. A new ceiling was then installed.

“There was very little left in good repair, because the roof had been leaking, but we saved what we could – including conserving decorative molded plasterwork which involved replicating missing pieces,” said Sheila O’Flaherty, adding that some of the original art deco lights had also been restored and retained within the auditorium.

Other works involved the installation of complete new building services, including ventilation in the foyer and bar areas, as well as heating, plumbing and general electrical works, plus the installation of a sophisticated new lighting system which can be adjusted to create different moods.

The auditorium’s stage area has been extended, and ramps have been installed down the sides of the auditorium to facilitate disabled access. New fully fitted toilets complete with new sanitaryware, fixtures and fittings have also been installed

“We had to adjust the seating levels which also involved quite a lot of building work, including the laying of concrete strip foundations and concrete slabs to create the new levels,” said Sheila O’Flaherty.

The project is due for completion in November 2014.

Procare Building Services Ltd is an established building company specialising in refurbishment, fit-out and design and build projects ranging in value from £50,000 to £4.5 million. Procare, established in 1995 have, since their inception, worked across a number of sectors including healthcare, education, commercial office, industrial and leisure within London and the Home Counties covering a variety of interesting and challenging projects.

Procare also undertook projector room alterations, the formation of the bars and the decorative foyer area, as well as dealing with the specialist sound insulation and installation of the speakers. The team also restored the golden proscenium arch above the stage.

“We worked closely alongside the architect to preserve as much of the existing building and original features as was practicable, despite it having been unoccupied and thus nigh on derelict when we first became involved. “

“As a company we pride ourselves on the quality of our workmanship, the professional skills of our employees and a well established blue chip client list.”