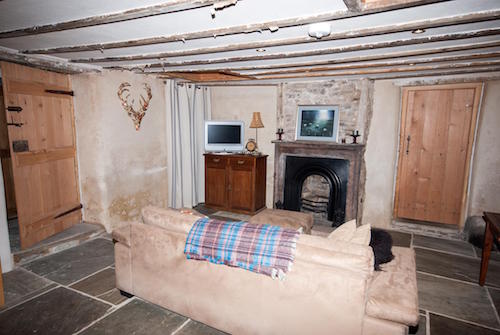 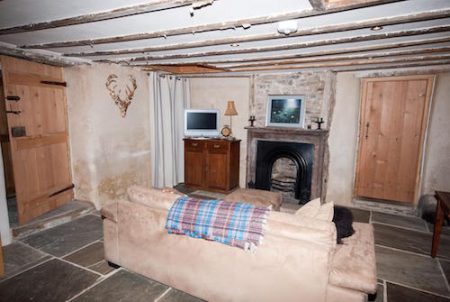 Middleburn Cottage has won a Commendation for Sustainability at 2014’s GIA Design Awards.

The traditional but and ben structure has been sustainability redeveloped to restore its original features whilst making it liveable by today’s standards.

We caught up with Douglas Bodell, an Associate and Conservation Accredited Architect at Robert Potter & Partners, who acted as the architects on the scheme. Douglas commented:

“We got involved with the scheme after being sought out by the client as we are based locally and have a lot of experience undertaking conservation projects. The Client was keen to restore the building in a sustainable manner in terms of the restoration and the methods and materials used.

“The old traditional style but and ben small cottage was in a derelict condition and hadn’t been inhabited for many decades when we first visited the site. The structure was a two roomed building with a byre and was in a poor state of repair; the roof was sagging with holes in and the stone walls were unstable. However there were also a lot of original features still evident in the structure which we worked to restore.” 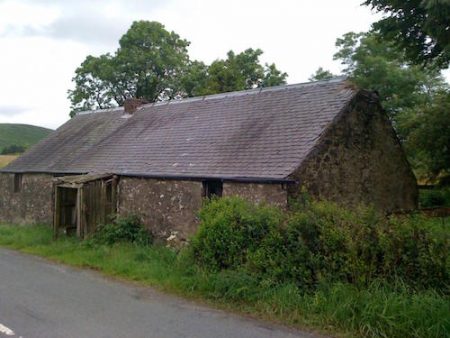 The structure was not wind and watertight and if left any longer would have fallen down. As part of the scheme a new dwelling has been created from the existing but and ben as initially it was not practical for modern living. A modest yet sympathetic modern extension has also been designed, constructed and attached to the rear of the property. The new extension used natural / traditional materials and was highly insulated.

The front part of the house, which faces the road, has been restored to its original stone-built finish and the slated, pitched roof has been restored. The modest open living-kitchen area directly inside the but and ben has been flagged with traditional stone and has been lime plastered. A rayburn range has also been installed to heat the space.

On the left side of the space the original fireplace and chimney have been rebuilt in the traditional manner and the byre has been transformed into a new bedroom. The built up windows have been opened up to create more light and space and the roof space has been re-plastered.

This project was seen very much as a conservation project not only to preserve and restore the original cottage but to carefully design a sympathetic and modern extension which did not result in any loss of historic character of the but and ben. The modest, contemporary extension manages to keep the rustic feel of the place alive and is linked to the old structure by a sun lounge link way. The extension provides a glazed, lighter living space for the owners comprising the master bedroom and bathroom. 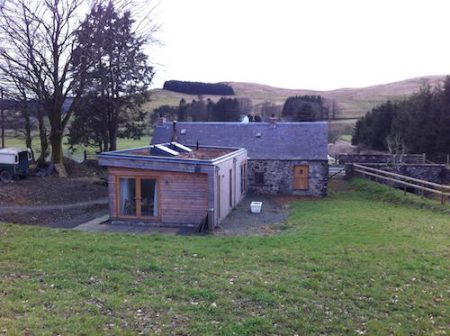 There is a clear break between the two spaces of the house but they are tied together with the same floor finishes and similar design touches. The new extension has been positioned directly behind the main building to maintain the appearance of the original but and ben from the road.

Sustainable materials have been sourced locally. Douglas said the onsite team did encounter some difficulties during the project, he commented:

“The main aspect of our Client’s brief was that the cottage was restored using traditional conservation techniques. Preservation where at all possible of the existing fabric to retain the historic integrity of the cottage was key together with the intention to use of breathable materials and traditional building methods. There was also an approach not to pristinely restore the building by the removal of later alterations such as the brick built chimneystacks as this would result in the loss of the historic integrity and the story of the building. There was to be no unnecessary disturbing or destroying of the building fabric no matter how minor. If any part of the fabric required to be replaced on a like-for-like basis to match existing this was the absolute last resort. Any part of the existing fabric that could not be repaired was considered for a new use to further enhance the historic character of the restored building. These were key aims to our Client and required all parties to be committed to this aim to be successful.” 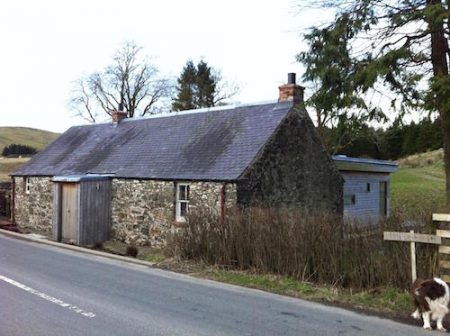 With regards to being commended at 2014’s GIA Awards Douglas added:

“It is very pleasing to receive an award as it justifies all the effort you’ve put into a project. From our client’s point of view it rewarded them in the manner they took on this conservation project as it wasn’t the easiest or quickest solution available to them.

“It has been a very interesting project with lot of elements to it that we were keen to be involved with. Middleburn Cottage whilst a relatively modest traditional building was able to be protected, preserved and transformed for the betterment of the historic environment. The result is a dwelling with lots of character and charm due to the honest repairs carried out. It was particularly pleasing to be recognised as a Practice by our peers for a small project of this nature.”