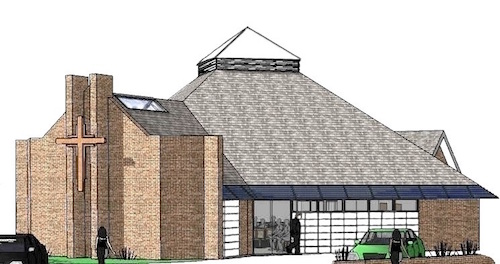 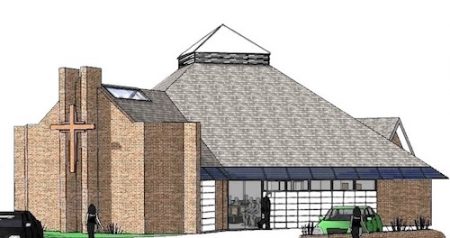 Designed on striking contemporary lines and topped by a Kalwall System pyramid, the new church, located at the junction of London Road (A22) and Lingfield Road, is being built on the same site as a 1938-built traditional style methodist church, which was demolished.

Main contractors for the project are HA and DB Kitchin; architects are CPL of Eastbourne.

Built to the latest standards, the new church will provide expanded accommodation together with a host of new facilities for use by the church and the local community.

“The multi-purpose church building will be a welcoming and inspiring place with an increased capacity and the flexibility for new expressions of worship (the original church had a capacity of 180 and the new church has a capacity of 378). It will also provide a state-of-the-art performance venue for music, dance, drama, meetings, and other suitable events.”

The new church has a steel frame structure, with brick external elevations topped with a Kalwall system pyramid to allow natural light into the interior. The building is naturally ventilated and the pyramid incorporates ventilation louvres, allowing air rising from the congregation to exhaust through the louvres.

In addition to the main worship area, the new building incorporates many additional facilities, including an entrance foyer, toilets, a kitchenette, reception area, meeting rooms, and an audio visual area. Underfloor heating is being installed and the new design includes a range of environmentally friendly features, in particular maximising the use of natural light, as well as L.E.D low energy lighting.

The main church incorporates a moveable divider to close off an area which can be used separately as a hall or chapel and will be known as the “Quiet Room.” 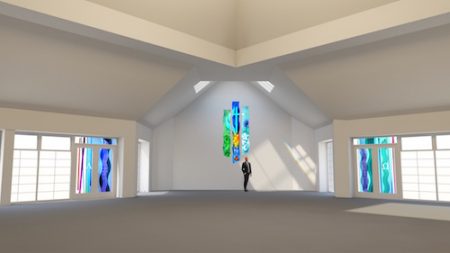 The new building will also feature modern stained glass windows on either side of the chancel and a stained glass cross sculpture by Derek Hunt of Limelight Studios, which have been specially commissioned by the church and will be installed after the construction work has been completed.

External works on the project include the creation of a new car park and landscaping.

“The whole concept of the design is to create a multi-functional venue. We see ourselves very much as a community venue as well as a methodist church and we anticipate all our facilities being available for hire for suitable community groups. We are very keen to get into the new church, progress on site is pretty good and is now two thirds of the way through” said Simon Bruce.

“We re very pleased with the architect’s design, because in the limited space which we have available, he has managed to accommodate all of the extra rooms and facilities that we wanted – as well as to give us more car parking space than we had before. The design demonstrates a very clever use of the available space,” he added.

The project commenced in February 2014 by demolishing the old church sanctuary, with the Mayor of East Grinstead removing the first brick.

The church’s existing community hall, meeting rooms and cafe, situated within a separate building constructed in 2005, are being retained. Church services are being held in this building whilst the new build project is underway.

The grand opening of the new building is in May 2015, when the church will be formally opened by the President of the Methodist Congregation of Great Britain.