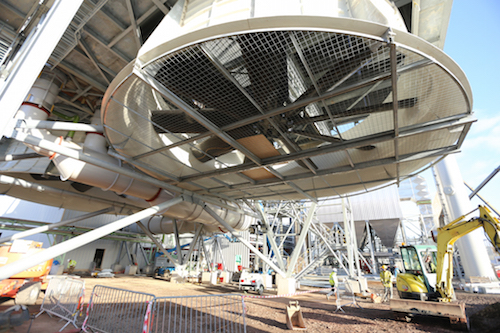 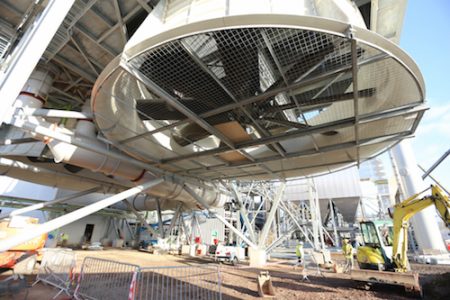 A 15.8MW Biomass Combined Heat and Power (CHP) Station in Northern Ireland, which is set to provide electricity to 30,000 homes, is currently seeing great progress during its construction phase.

The Plant, based in Lisahally, Co. Derry-Londonderry, is scheduled to be completed and operational from September 2015, and we caught up with one of the main figures behind the project.

Ciaran Devine is the co-founder and developer of Evermore Renewable Energy. Speaking about the project – the first of its kind on the island of Ireland – Devine expressed how proud he is to see the progress there has been.

He said: “It is fantastic to have developed this scheme, as it is a flagship renewable energy project for Northern Ireland. From a developer’s perspective, we were keen to bring this development to Northern Ireland as it is the first project of its kind, on this scale, on the whole island.

“From it we have created about 220 construction jobs during the 24 month build period, and once operational, there will be a further 20 to 25 permanent positions created,” he said.

The project, upon completion, will span a 24 month construction timeline, with the thorough testing and commissioning process set to begin in March this year. During this period, the on-site team will carry out a number of tests as agreed with System Operator Northern Ireland (SONI), as well as ensure the project is compliant with all the environmental requirements. When complete, it is expected to provide Northern Ireland with around 10% of its renewable energy.

The main contractor, BWSC, are a Danish construction firm specialising in small to medium scale power plant construction projects. They have employed a number of sub-contractors, including German firms Weiss and Vecoplan, as well as various Irish and Northern Irish firms throughout the construction process.

Mr Devine said: “We are immensely proud that we are now part way through the construction. We are also delighted to work with a competent and professional contractor like BWSC, who are extremely competent in delivering these complex engineering projects. The construction timeline is also being met which is key for us as a developer.”

The power plant is located just a stone throw from Londonderry Port & Harbour, and actually sits next to another 400 mW Power Station and so is strategically located. Being next to the other power station allows the on-site team, to access the grid infrastructure next door to export electricity.

The Lisahally site had previously been empty for the past 30 years, and after 12 months of fundraising Evermore Renewable Energy was able to secure £81million in funding. Devine says however there have been a few challenges due to the difficulties of choosing appropriate investors for the scheme.
“All projects of scale and complexity attract a number of interested parties hoping to invest, however we had to find a number of suitable funders who could understand the Northern Irish electricity market and the Northern Ireland renewable energy market. It was quite a challenging and lengthy process. However, once we had secured investment the rest of the scheme has been made straight forward by having a single EPC contractor taking full control over the build.”

Redecam was responsible for the flue gas treatment plants on the project.

WEISS engineers specialise in biomass and waste furnace boiler plants and since their inception in 1925 have become renowned worldwide as experts in the development of solid fuel combustion processes for generating energy, particularly the combustion of any kind of dry or wet wood residues as well as other biomass.

The firm has previously designed plants in the wood industry to generate heat and electrical as well as constructing Combined Heat and Power Plants in accordance with the Renewable Energies Act (EEG).

On the Lisahally project Weiss constructed the boiler plant for hot steam generation, equipped with a furnace for waste and natural wood.

“As a company we pride ourselves on constructing more than 50 boiler plants with combined heat and power plants.”