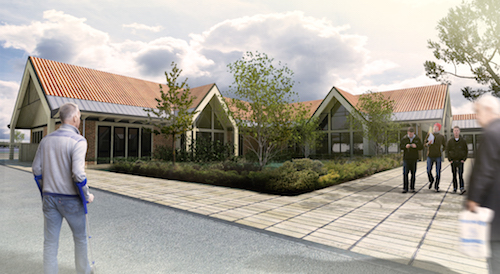 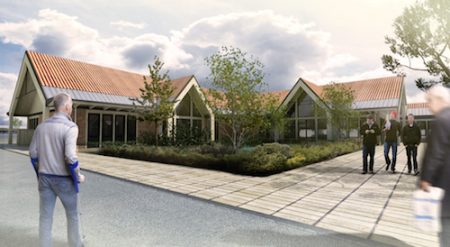 Construction is nearing a close on Jack Berry House, the latest build from the Injured Jockeys Fund, after a 14 month project.

The Injured Jockey Fund have built the new centre as a haven for jockeys to gain access to vital facilities key to their fitness rehabilitation, based in the north of England.

Premier Construction caught up with Nick Silcock, Director at Townscape Architects, who have worked with the Injured Jockeys Fund for four years. Nick commented:
“Initially we helped the charity find the right site and helped them to secure it for the development. A number of sites were assessed in the local area as the charity wanted the building to be located in a northern racing community. Malton was the natural choice as it has a strong racing community and the local economy is based strongly around racing.

“The charity also wanted a site that was close to a town centre so that when an injured jockey went to stay there they were not stranded in the middle of nowhere. This location means jockeys have the opportunity to go into the town and use the facilities there.”

Located on the outskirts of Malton, the site is peaceful and boasts beautiful views of the countryside, yet is still just a ten minute walk from Malton town centre. The charity wanted to create a cutting edge facility that would be attractive for jockeys to stay in for up to a few months during their rehabilitation.

In light of this, the design of the facility, which had to be single storey in order to fit in with the local surroundings, has been designed so as not to have the appearance of a nursing home. The newly built centre, located in between Malton and Old Malton, has been constructed by main contractor Illingworth and Gregory and from a distance looks like an old farmstead with red tiled roofs, in a courtyard style development.

At closer inspection the centre has been finished with modern materials including aluminium which edges the roof, dramatic overhanging canopies, a timber framing and stainless steel connections. This is to give a modern twist to the traditional building form.

“We are honoured to be involved in this most worthy venture as it recognises and deals with the risks which those in racing take every day of their lives.”

The centre contains four en suite bedrooms, a lounge, a games room and a kitchen for use by injured jockeys from as little as two days to two months. Guests can then walk through a covered walkway into Jack Berry House’s main area which comprises a treatment suite. This consists of four treatment rooms, a large gym, a hydrotherapy pool and changing rooms; the venue also contains a foyer area with a waiting area, offices and a reception area.

There is also a separate manager’s house on site as well.

The Injured Jockey’s Fund wanted the centre to be a space for the rehabilitation of jockeys as well as a centre those in the field already can use to avoid injury. The venue will be opened officially later this year.

Nick said there were a few difficulties during the construction and planning process due to the site being in a historic and greenbelt area. Nick added:

“Planning was challenge because of the area so we worked closely with the local authority to come up with a scheme to satisfy their requirements and the charity’s. There were also archaeological issues that needed to be overcome so an archaeological survey was undertaken and all items were removed from the ground before the project began.”

Despite the challenges Nick said it was great for his company to be involved in the scheme. He explained:

“It is great to do this project as it is for such a good cause and a local project. We have really enjoyed the process and helping the charity achieve their goals. It was nice to be involved and see the scheme through from finding a site, getting planning permission, finding contractors and seeing it built on site: all of this makes the job feel worthwhile.

“We would like to use the expertise and knowledge gained on this project to help other charities do similar projects in the future.”