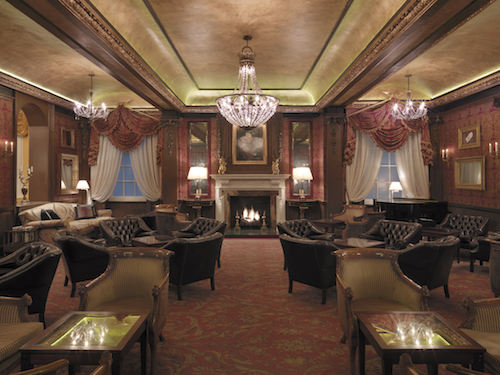 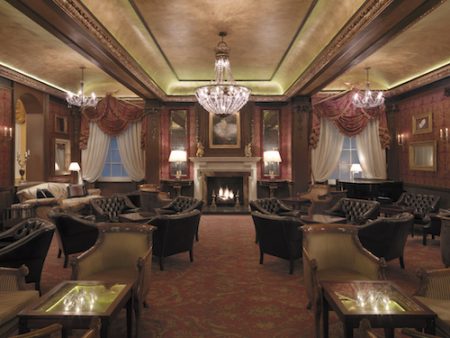 A project to renovate the five star luxury hotel, The Goring Hotel has completed after giving the historic structure a new lease of life.

The Goring was originally opened in 1910 by German born entrepreneur Otto Goring; it is Jeremy Goring, Otto’s great-grandson who now runs the hotel as the fourth Goring to operate the venue.

Keen to find out more about the hotel, which reopened its doors on the 21st February in time for its 105th birthday, we caught up with one of the designers who worked on the scheme, Tim Gosling from T Gosling Limited.

“We became involved with the project after meeting Jeremy Goring through David Linley, another designer on the project, and the collaboration evolved from there. We worked on the renovation of the hotel’s drawing room, bar, terrace and bedrooms over looking the Garden, these were created over a period of many years. 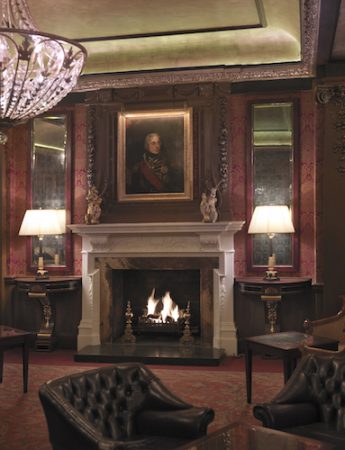 “Our part of installing the Lounge, Bar and Terrace took about four weeks in total having planned it for over eight months beforehand. With regards to the brief Jeremy Goring said he wanted us to change the space yet not really change anything. He wanted us to make the space wonderful and luxurious but didn’t want people to walk in and think it had completely altered.”

With Jeremy’s brief in mind the team were keen to make sure the space retained its essence and so remained familiar to old clients. In the bar the team have revamped what was a well used 1980’s designed space and created an eclectic, quirky drinking venue.

An interesting design feature of the bar is the number of frames situated on the walls. The walls which are lacquered deep red have many frames, which contain smaller frames inside the larger ones creating a quirky take on normal decorative items. The high bar stools throughout the space have been upholstered in luxurious fabrics.

The firm worked alongside the project’s main contractor ISG, who have worked on all of the phases, dealing with the problems associated with a building built 100 years ago. Tim said the biggest challenge was the buildings electrical system; before works began the design team told ISG what they hope to achieve in the space and between the two companies they worked out the logistics of the proposal. 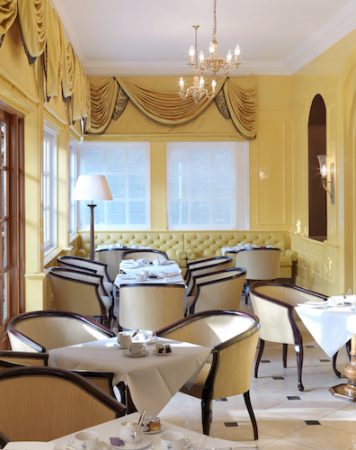 The Goring’s Lounge has been given a facelift inspired by the Goring family’s close relationship with the royal family. Buckingham Palace is located close by to the hotel and as a result the royal family often use the hotel and its lounge for private engagements. The design team therefore had to ensure the space was fitting for all of its uses.

The space has been lifted by the fitting of silk on the walls; the eye-catching military brocade style silk freshens the space as does the gilded ceilings. Impressive chandeliers by Fine Art Lamps are also a main feature of the newly renovated space adding a sophisticated sparkle to the previously loved room.

One frame in the lounge has its mirror missing and has been replaced with a glove emblazoned with a pink ‘P’ reminiscent of the pink panther. This quirky design touch reflects the Goring family’s sense of humour and adds a sense of mischief to the space.

The terrace section of the hotel is famous for providing luxurious, decadent afternoon teas and so its renovation was necessary. The terrace has been redefined with chairs and tables to make the space more functional for afternoon teas and has been painted in a bold, Chinese yellow which makes a different to the luminosity of the design. 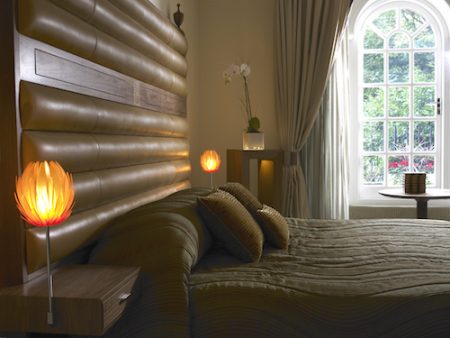 Three of the hotel’s garden suites have also been revamped by Tim Gosling and his team in a bid to make the suites useable for the next 10 years. The bedrooms have been brought into the 21st century with the latest mod-cons, and the beds have been adorned with striking bed heads made from English walnut and rolled lengths of leather.

The bedroom tables have been floated off the floor to avoid a sea of legs and unique 3D printed lamp shades decorate the bedside tables . Muted, warm greens and reds also add to the tranquil feeling of the room. Tim added:

“Preparation was key to this project. When the hotel initially opened in 1910 every room had a working fire and an en suite which was revolutionary and so we were keen to continue to push the boundaries during this renovation. We wanted to make sure the suites were big enough without knocking walls down and so it was hard to work on a structure that has been standing for 100 years.

“Undertaking this renovation with people that really care about it is great. Jeremy, his family and I care so much about the experiences people have at The Goring that we wanted to create the best design and craftsmanship. I am incredibly proud to have worked on this project and have a wonderfully close personal relationship with the Goring’s and their hotel.” 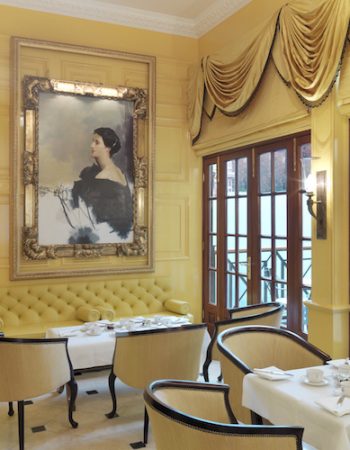 Target Lifts specialise in lift modernisation, refurbishment, maintenance and repair. The firm have been an approved contractor The Goring Hotel for many years and have acquired a testimonial from them.

At The Goring Hotel the firm initially provided advice to the main contractor with regards to the finishes to the lift car. The firm also supplied and fitted bespoke sweep indicators to the car and landed, as well as interfacing the new indicators with the existing panel.

“We also supplied a bespoke brass operating panel inside the car to match the newly decorated car walls and where required we assisted the main contractor, where lift knowledge was essential to helping them achieve their programme.

“This project was important as we had a new client to impress; 3 Interiors, as well as keeping our own client The Goring, happy, The Goring has a rich history and as an independent company we are proud to provide excellent service and value for money.” 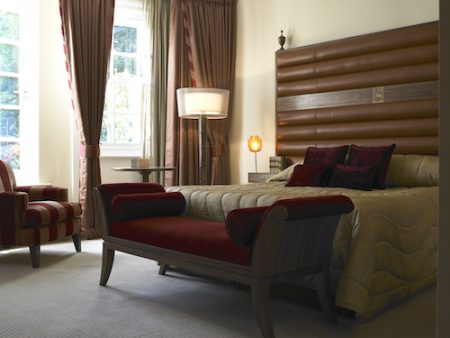 Designers Russell Sage, Nina Campbell and David Linley have undertaken the remainder of the renovation including updating the remaining suites, The Dining Room and the Royal Suites.

Russell Sage Studio has also been heavily involved with the hotels revamp. We caught up with the interior design firms Director and Owner, Russell Sage, to find out more; Russell commented:

“We have worked with The Goring for the last six years and have undertaken the renovation of most of the hotel’s bedrooms, its royal suites, the lobby and reception. The design process began over 18 months ago as it was quite big deal for the hotel to close for a month; so the scheme of works had to be planned like a military operation.”

The team started work on site at the beginning of February this year and handed back to the hotel at the end of the month. Working alongside main contractors 3Interiors the team were keen to maintain the ground floor’s classic design, as well as creating a new, fresh communal space. The aim was to give the lobby and reception its own identity without detracting from the classic features of the hotel. 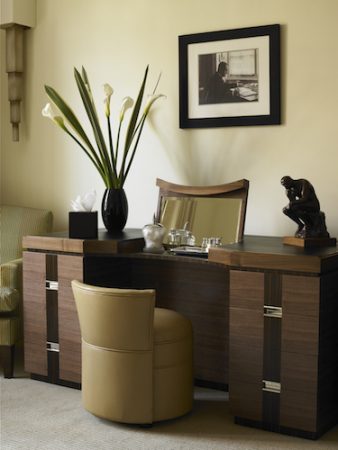 The lobby has been adorned with hand painted silk containing an allegorical theme that runs around the room displaying varying scenes. Hotel owner Jeremy Goring played a part in the imagining of these scenes and worked closely with Russell and his team.

Russell has worked on the bedroom suites over a number of years in various stages. Russell explained that the new bedrooms comprise beautiful fabrics and silks creating a unique personality and identity to each of the suites.

The team had to work quickly in order to meet the tight timeframe set by the hotel.

“The Goring is very special because it is one of the few remaining family run hotels. It has a fantastic relationship with lots of different clients from international dignitaries to the royal family; so it is always exciting to work with.” 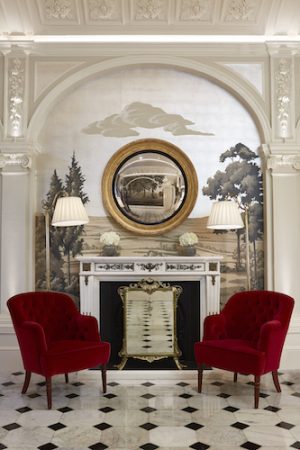 “Even through two world wars The Goring has never closed. However we really wanted to give Russell Sage and all the craftsmen space to complete this total renovation. We will now emerge, even better – and ready for the next 100 years to come. And our new Goring foot men will really add another dimension to our service.”