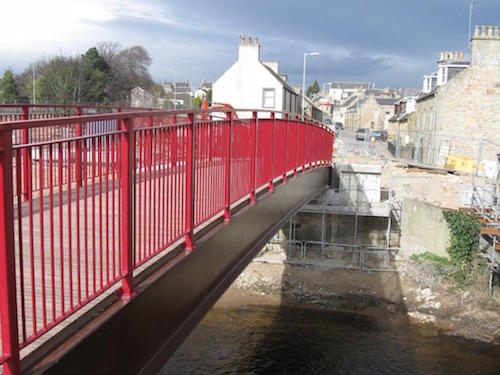 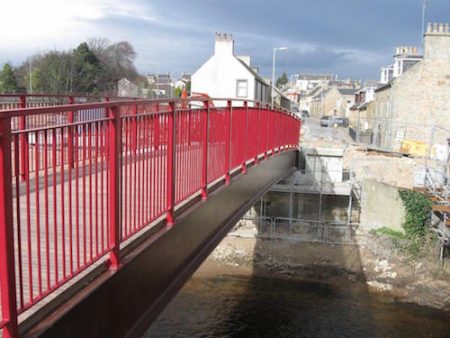 The multi-million project is due to fully complete in the summer of this year although most of the flood defences have been largely operational since April.

Premier Construction caught up with David Gowans, Consultancy Manager from Moray Council, who has acted as the Project Director for the whole series of flood schemes in Elgin since 1999. The current project in Elgin is the last one to be completed in the area and is definitely a labour of love for David. He commented:

“The principle of this scheme is to restore the River Lossie corridor and create more space so that there is a channel that can flood. This will be constrained by flood banks which are set back from the river. To do this we have opened up the flood plains which involved removing some houses, properties and businesses and relocating them.

“The main bulk of works has been to create space for the river throughout Elgin and has involved the construction of one major new road bridge in a conservation area and two foot bridges.”

Works began on site in 2011 with Morrison Construction acting as the main contractor and Royal HaskoningDHV acting as the design consultant and carrying out the civil engineering services. The team have been assisted by E C Harris who have been undertaking the cost consultancy and Cleveland Bridge Engineering who fabricated and directed the Landshut Bridge programme.

The project has progressed in sections starting from the bottom of the river in order to avoid increasing flood risks by improving the flow at the top of the river. At the lower end of the River Lossie the team have created widened flood plains to create more space for the water, as well as realigned another water course so that its confluence was further down stream.

This realignment ensures the water does not flood back up the water course into other parts of Elgin. Works then progressed onto the replacement of an existing bridge and the construction of Landshut Bridge over the river, as well as a new diversion channel. Landshut is an interesting twin steel arch structure which cost around £6 million to construct and despite causing the team several technical challenges during its fabrication and construction it has been successfully completed.

The next phase of works involved further flood plain widening in Cooper Park, an old Victorian public space in Elgin, and other greener parts of Elgin. The team also undertook a considerable programme of works at Mansion House Hotel including raising a Listed wall using natural materials found from the same source.

The hotel remained in operation during this period and the scheme was successfully completed in 2013. David added:

“We are currently working in an area called Old Mills and Merrywell which are the final flood banks of the scheme. Upstream of there we have protected Glen Murrays distillery which had been flooded several times in recent years. Our works have enabled the distillery to expand its operations now they are free from flooding.”

CTS Bridges were contracted by Morrison Construction to design, manufacture and install the Lossie Wynd Footbridge as part of the scheme. The new foot/cycle bridge us 25.65 metres long and three metres wide comprising galvanised and painted steelwork. A high spec paint has been used to withstand harsh weather conditions.

CTS made provision for a number of ducts and duct hangars underneath the bridge to allow services to be attached. The hardwood bridge deck has Hi-Grip Excel inserts to provide a non-slip surface for use by pedestrians and cyclists.

Although most of the works have progressed smoothly David said the team did encounter a few challenges. He added:

“One of the biggest challenges has been dealing with contaminated land. Having passed through former industrial areas removing businesses the team had to deal with land contaminated with hydro-carbons. In order to deal with this we used a site which comprised unusable football pitches; we raised the land and used it as a treatment centre for bio-remediation.

“We also found considerable amounts of asbestos and asbestos contaminated soil which we have treated in that area as well. After we have finished with the area it will be soiled, seeded and new drainage will be installed so it can be restored to football pitches.”

Apart from a few other technical challenges with the utilities, particularly with sewers and water mains, the scheme has progressed on time and budget.

David told us that he hopes the scheme will become part of Elgin’s landscape of Elgin. Moray Council have been working in partnership with SOSTRANDS and other community funders to develop a cycle way using the flood banks of the river.

“It means a lot to me to have worked on a project like this. On the 11th August last year there was a major flood but due to a massive effort on the day we managed to hold the river within the new banks.

“Our efforts on that day saved more than 200 properties in Elgin from flooding, as well as 800 other units across Moray. It means a lot to have been involved in a project for so long and it be a major success.”