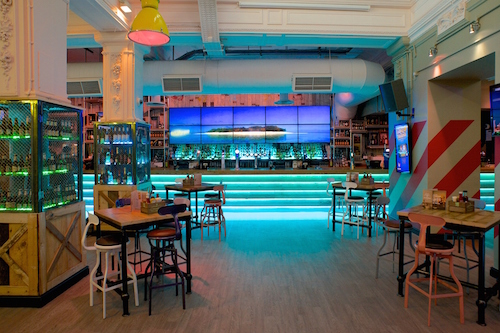 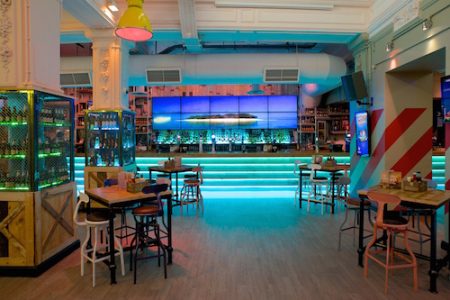 iNTERTAIN, owners of the Walkabout brand, have recently introduced a brand new design to their Bristol Walkabout branch, which is set to be rolled out across the country.

The venue has been transformed in an impressive three and a half week project, to represent modern day Australia.

“The new concept is premium and much more female friendly; it doesn’t focus on the night time party trade as much. Instead there is more of an emphasis on food, coffee and lounging. The brief and design is completely new for Bristol which moves the brand design on significantly.”

Play Design Consultants began the design process with clients iNTERTAIN in November 2014, undertook some initial designs before deciding Bristol was the best site to implement the new design concept.

Works started onsite in February this year, with Stenball Construction acting as the main contractor, and works completed in March after a three and a half week turnaround. Most of the materials for the venue, such as artwork and furniture, had already been made prior to works going on site which saved the team precious time. 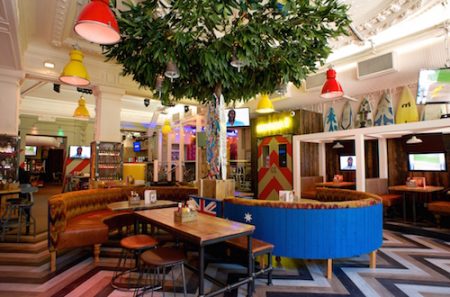 The Bristol site was opened about 12 years ago and reflected the old style Walkabout, which followed a Crocodile-Dundee-esque theme. The new design is based on the new vision of Australia comprising a number of sleek finishes, reclaimed elements and Australian features.

Bristol’s Walkabout is located within a Listed structure and so the team have made the most of the building’s historic features. During the project the venue was stripped back to display the building’s Listed granite, steel pillars and the stud walls have been pared back to show off the original structure as much as possible.

Those walking into the new venue enter through a newly configured doorway, and are presented with a large four metre high tree, with a six metre canopy, which rises out of a new S shaped seating arrangement.

The new seating booths are made out of reclaimed timber and have been decorated with lanterns and fairy lights, as well as the Australian flag. A new bar, clad in reclaimed timber, is also a main feature of the space comprising a large big screen video wall on the back bar displaying lifestyle media and stunning Australian imagery, including images of a coral reef.

Raised areas in front of the bar comprise a beach side gazebo with seating made from shipping crates. The unique indoor-outdoor space uses the specialist lighting system to recreate the natural light outside; so in the day customers relaxing in the gazebo will see daylight from the faux sky above them and at night stars will appear above their heads.

The lighting, provided by Audio Visual technicians Sound & Power, is a large feature of the new Walkabout. The old style of lighting, which was controlled by a dimmer pack, has been scrapped and a new DMX cable has been installed which links to and can be controlled by the computer system. 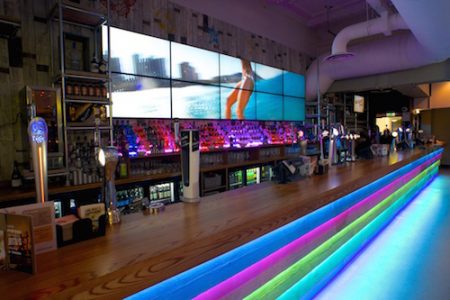 Other contractors involved include Perspective Signs and Plant Republic.

The cosmopolitan space boasts a number soft furnishings and feature materials across numerous zones which reflect how things are Down Under.

“It is great to be involved with iNTERTAIN having been on such a journey with them over the past few years. It has been very much a partnership and the Bristol installation is the sum total of that partnership.

“Bristol is a stunning environment that really pushes Walkabout light years ahead of where they were. Also in comparison to the other offers on the high street I think Bristol pushes the brand way ahead of them. We are so happy it has been such a successful partnership over the years, which has culminated in such a stunning environment.”

Walkabout is now rolling out the new design concept in the Newquay, Brighton and Bournemouth branches.