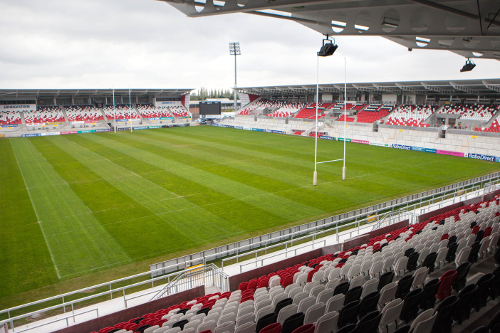 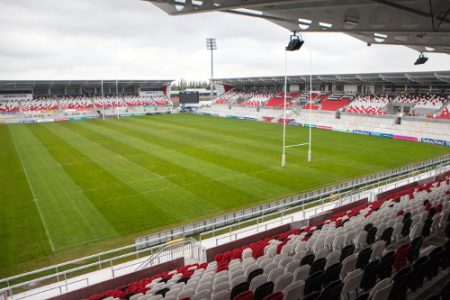 The construction of a new memorial, family and grandstand with associated facilities at Ulster Rugby, formerly known as the Ravenhill Ground, has been completed following an extensive three year project.

The £13 million project was awarded to main contractors Gilbert Ash in October 2012. Works on site began in November 2012 with Gilbert-Ash acting as the main contractor on the scheme.

The Gilbert-Ash Design Team consisted of Glasgow based architects, Holmes Miller, structural engineers Horgan Lynch and MEP Consultants, Delap & Waller. The team were chosen for their stadia expertise and also on the basis of previous successful relationships working as part of a Gilbert-Ash led Project Team.

Initially a comprehensive enabling works package was undertaken including the construction of temporary Control Room, to be used during the season to coordinate all Health and Safety activities on Match days.

A new incoming NIE cable was installed to ensure sufficient power for the new stadium and temporary spectator areas were constructed at each end of the pitch. Whilst these initial activities were progressing detailed designs for the new Memorial Stand and the Family Stand were underway. 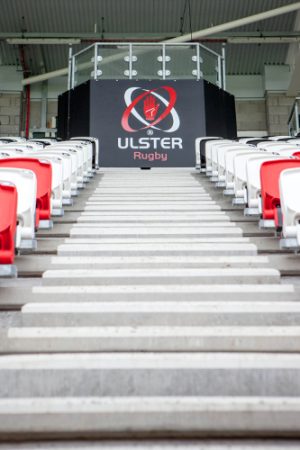 Ballykine and Bullivant Tarranto were procured to deliver the Structural Steel and Pre-Cast Concrete Packages and so were involved in the project from the early design stages. Early completion of the frame design was necessary to ensure that the foundation designs could be completed promptly to maintain progress on site.

Ulster Rugby put in place a strict programme with a series of critical handover dates to coincide with the activities of the professional team and the fixture list. The club were keen to maintain a stadium capacity of 11,500 during the construction period and in order to achieve this works had to be completed in phases.

The New Memorial and Family Stands at each end of the pitch were successfully completed with reconfigured terracing to the front of the Premium Stand for the start of the 2013 / 14 Season which kicked off with a friendly against Leinster on 23rd August 2013.

The Nevin Spence Centre, the club’s new educational and heritage facility, can also be found in the Memorial Stand, as can the official Club Shop for all Ulster Rugby Merchandise. 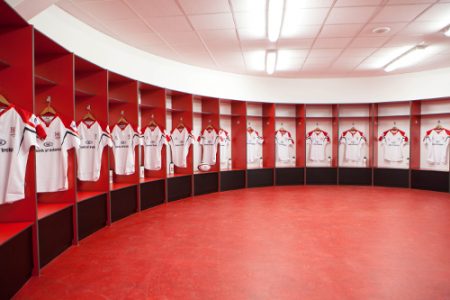 The heritage and education centre, which works continue on, will feature the history of Ulster Rugby and also seeks to educate young people on the benefits of an active lifestyle. The centre is set to open in September this year in memory of the highly talented young Ulster Rugby player who died in a farming accident, along with his brother Graham and father Noel in September 2014.

Upon completion the centre will contain interactive and audio-visual content enabling visitors to explore the history of rugby in Ulster and the benefits that the game has for supporters, players and society in general.

The centre will also provide a dynamic stimulus for learning in alignment with the school curriculum and Ulster Rugby’s existing grassroots programmes.

Commenting on the decision, John Robinson, President of the IRFU Ulster Branch, said:

“I believe that it is entirely fitting that the IRFU Ulster Branch has decided to name the new education and heritage centre at Ravenhill – ‘The Nevin Spence Centre’.

‘This facility will have a special emphasis on visits by young people and will be a testimony to the type of life that Nevin chose to lead and was passionate that others should enjoy.

‘It will be a vibrant centre and will demonstrate the benefits that sport can bring to everyone.

‘The Spence family are very supportive of this decision and I would like to extend my personal thanks for the courtesy they have shown us when we have had discussions with them and visited their home.”

“I am honoured to speak for the thousands of fans who watched with increasing admiration as Nevin progressed through the ranks of our Rugby Academy, to make a massive impact upon the Ulster Rugby squad. We all have very fond memories of great days, great tries, great matches and great victories, with Nevin in the thick of it all.

“For him to have been so tragically snatched from us in his prime is a sadness that will always remain with us and the dedication of the Nevin Spence Centre to his memory is indeed a great tribute and a mark of the very high regard in which he was held and of all that he had come to mean to the Ulster fans.”

The revamp of the former Ravenhill Ground has also seen the new Family Stand equipped with a range of new facilities including a state of the art basement gym facility for the professional team, as well as physiotherapy and treatment rooms and new changing facilities. A Video Anaylsis Suite has also been constructed in this stand along with Team Meeting Rooms, Office Facilities and a new TV Studio and Control Room.

In May 2013 the demolition of the old historic Grandstand began, paving the way for the construction of the New Grandstand, which was successfully completed to hold the Quarter Final of the Heineken Cup in April last year with a capacity of 17,500.

The Quarter Final was a spectacular occasion for the Ulster Team and saw the new state of the art facility showcased to a worldwide audience of over 10million by Sky Sports who were broadcasting the Match from the new purpose built TV Studio housed at the back of the Family Stand. 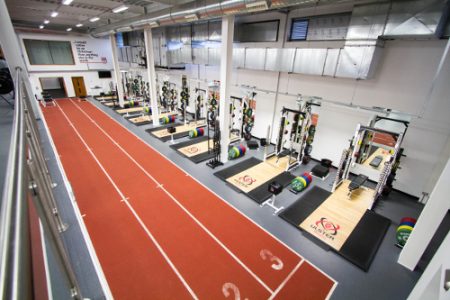 The final elements within the Grandstand were completed in the last few weeks of April last year including the New Home and Away Changing Facilities, Treatment Rooms and the New Members Bars and Committee Room on Level 1. The Stadium was then officially opened on Friday 2nd May 2014 before the Rabo Direct League Fixture against Leinster who coincidentally were the opponents against Ulster when the Stadium was first opened back in 1924.

In order to bring Ulster’s dreams for their new stadium to life over 140,000 workers played a part. Employment on the site peaked during the out of season period in July and August 2013 when there was 180 operatives on site.