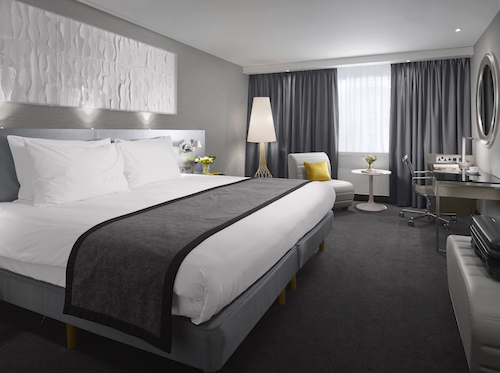 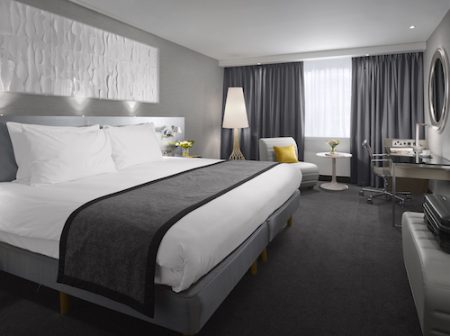 The first phase of a renovation project at Edinburgh’s Radisson Blu has been successfully completed.

Having refurbished 110 of the hotel’s bedroom and suite stock during the first phase Radisson is now set to revamp the remaining 148 rooms by April next year.

Premier Hospitality caught up with John Mather, Director of Trevillion Interiors, who acted as the design consultant and project managers of the scheme, as well as managing the procurement for the project. Trevillion have been involved with the Radisson brand for the past three years and so have worked on a number of projects previously with the hotel operators.

“The hotel’s bedrooms were tired and in need of an overhaul, along with the corridors. Some of the fire regulations needed to be improved as did the health and safety regulations. We were briefed to provide two standards of room; a Standard room, a Business Class room along with the suite offering as well.

“The Standard room is a company brand room which we have tailored to fit the hotel’s layout and the business class room is the extended and improved version of the brand standard version.”

John told us he and his team began the design process 18 months ago with works starting in January 2015. Trevillion worked alongside Edinburgh based main contractors, George Sharkey, who won the contract after bidding for the scheme in a competitively tendered scheme. 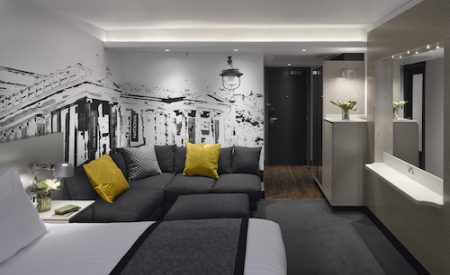 The project has seen all of the rooms fitted with new air conditioning facilities by mechanical consultants; PSK. In order to complete the project effectively in an operational hotel the team sectioned off a number of rooms and corridors in a multi-phased approach. Over four mini-phases 110 were worked on; throughout this process the on site team worked closely with the hotel management team to ensure they adhered to the noise restrictions.

“There are always problems working within a live hotel so the contractor had daily meetings with the hotel managers to advise them of what works they were set to undertake. The hotel would then advise them of the restrictions they have on that particular day and works would be decided on that basis. We have had a very close working relationship with the hotel throughout.”

The design of the standard room is a brand standard room taken from Radisson, in Brussels, and has been adapted by the design team in line with UK standards, as well as expanded the layout for the Business Class rooms.

The Business Class rooms comprise feature walls depicting stunning views of Edinburgh as a mural in black and white, as well as silver panelled walls. John added it is pleasure to be involved with Radisson:

“It means a great deal to us to be involved with the Radisson brand; they area great client and are nice people to work with. We are more than happy to be associated with them.”

The next phase will begin November this year, allowing the hotel to operate as usual for a number of months in its busiest period. The phasing process was decided on to enable the Radisson team to deliver a flawless service during peak trading time.