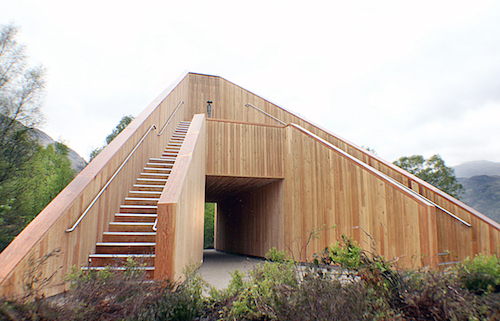 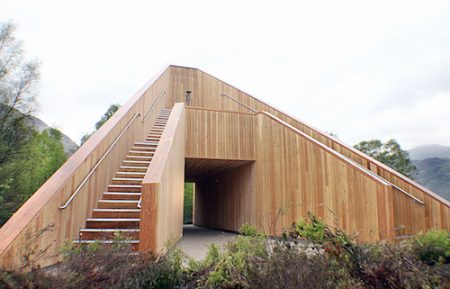 A Scottish Scenic Routes initiative, commissioned by the Scottish Government has seen the construction of numerous architectural interventions throughout the country in a bid to define points of natural interest and boost local economies.

The most recent of these structures is an impressive viewing tower in Inveruglas offering stunning views of the Loch Lomond.

The structure has been named An Ceann Mor and is the final installation of the first phase of the Scottish Scenic Routes pilot project. It was officially unveiled by Richard Lochhead MSP, Cabinet Secretary for Rural Affairs, Food and the Environment on the 13th May 2015.

The site is located on a peninsula overlooking Loch Lomond and is home to an existing café, a car park with adjoining jetty and a system of pathways leading onto the peninsula. Works officially began on site at the start of January this year and have seen the site transformed by the impressive viewing tower which has been erected. 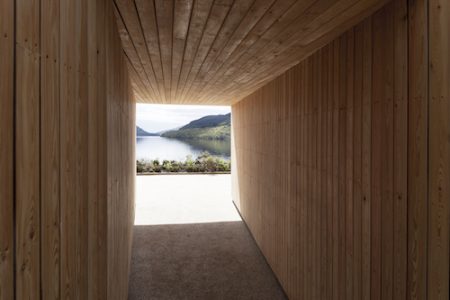 Benches and walls throughout the site encourage visitors to absorb the views of both the loch and the peninsula itself. The topography of the site allows the surrounding landscape to be experienced as a panorama; with the site itself is visible from afar as a rock amongst water.

We caught up with Daniel Bär, founder of BTE Architecture, who entered into the Scottish Scenic Routes initiative and was awarded as the lead designer and architect on the Loch Lomond scheme.  Working alongside his two colleagues, co-founders Stéphane Toussaint and Sean Edwards, Daniel designed a landmark structure which takes the shape of an isosceles trapezoidal platform and is positioned on the highest point of the peninsula.

The steep rising platform offers a number of seating facilities vertically with steps going up and around the perimeter of the form. 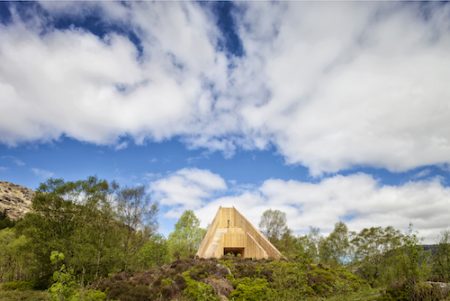 Benches have been interspersed between the steps to create the central core of the structure. The seats offer views, both across as well as along the loch, which are currently obscured by trees. At the centre of the platform a second and easy accessible entrance threshold leads in the opposite direction from the platform.

Depending on the visitor’s position, the views are either directed towards the loch or onto the peninsula itself.

Externally the viewing tower creates a distinctive point of attraction by showcasing the vast drama of the landscape.

The structures two vertical balusters and the horizontal steps and benches are constructed from timber, giving the viewing tower an organic, yet bold appearance. It contrasts and compliments the various greens of its natural surroundings and the usable inside of the structure invites the visitor to have a seat. 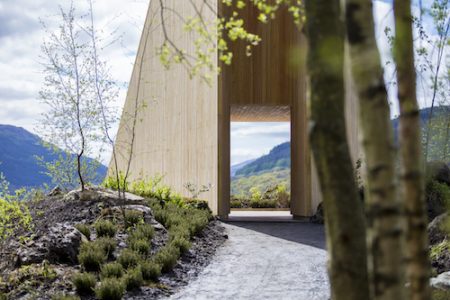 Land Engineering acted as the main contractor on the scheme, working alongside BTE and the Loch Lomond & The Trossachs National Park (LLTNPA), who did the site supervision. LLTNPA was created in July 2002 under the National Parks (Scotland) Act 2000 to safeguard an area of outstanding and diverse landscapes, habitats and communities, parts of which were coming under severe visitor and recreational pressures.

Daniel said it means a lot to him and his colleagues to have worked on this project, he added:

“It is great for us to be involved because it gave us the chance to showcase what we can do. It is a public building and so attracts a lot of visitors which is very different to the residential developments we do. It has been a very rewarding project for us to work on something so bold that can be enjoyed by others. All in all it has been a very positive project!” 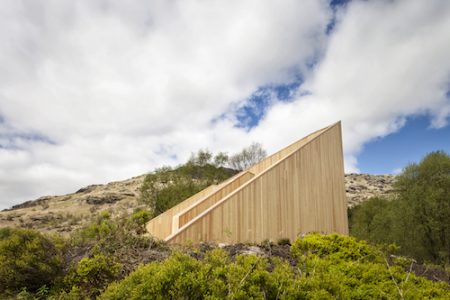 An Ceann Mor has been designed to the highest standards of accessibility and sustainability so that people who have limited mobility are able to appreciate and explore the tunnel, as well as enjoy the spectacular views of the Arrochar Alps in the west across Loch Lomond to Ben Lomond in the middle distance.

JPO Joinery specialise in bespoke joinery for both commercial and domestic projects. The firm are house builders by trade but also undertake all aspects of joinery work from fitting doors and kitchens, to extensions and more unique projects.

During this project the firm completed every area of woodwork, from building the initial panels, forming of the stairs and seating, to the cladded finish. 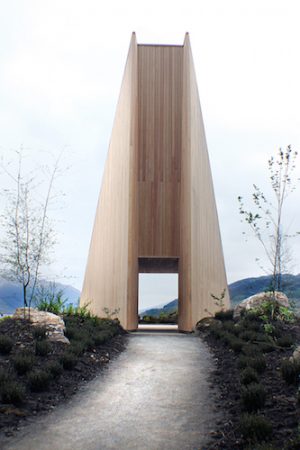 Jonathan Orr from JPO commented:
“It was a privilege adding to the Loch Lomond landscape as projects like this are few and far between. Being part of a project this prestigious was an opportunity not to be missed.”