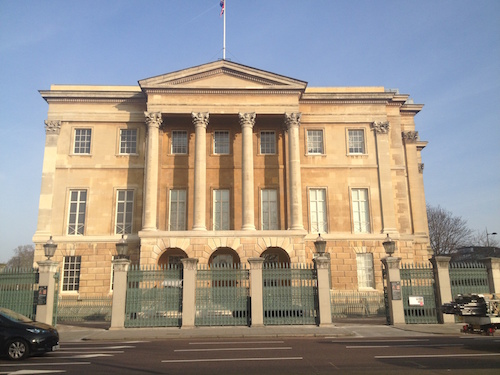 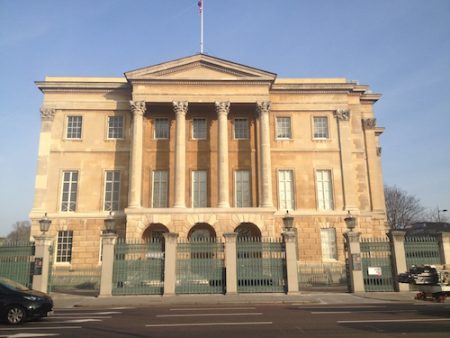 Restorative work to the historic Apsley House, located on the corner of Hyde Park in London, has been completed following an extensive scheme of works mainly focusing on the structure’s stonework.

Works began on the project in November last year after a four month planning process where English Heritage worked alongside Davies Sutton Architects and main contractors Sally Strachey to sufficiently plan the scheme of works.

Davies Sutton Architect got involved with Apsley House through an English Heritage Framework Agreement, beginning design works in August 2014. It was after the architectural firm got involved and works began on site that David Carver, Architectural Technician at the firm, realised his personal links to the scheme. David commented:

“I did a lot of the drawing and detailing for the project and it was when we started work that we realised I was related the Marquis of the Estate, the First Duke of Wellington’s eldest brother through my grandmother. It was very interesting to be working on something that links with my family history.

“As a company we work on historical buildings and are specialists in conservation and weren’t aware of my connection until we started work.” 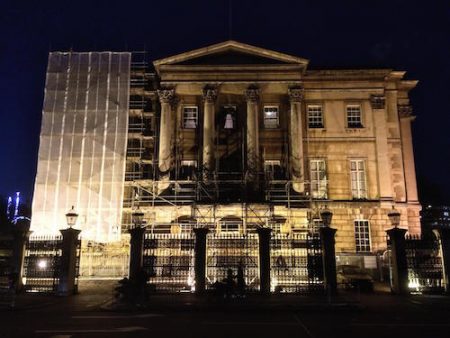 The brief from English Heritage was to undertake an array of conservation works, mainly related to the stonework on the building. The on site team initially cleaned the south façade of the building, as well as undertook a number of external stone repairs and replacements throughout the structure.

Lead works around the house’s parapets was carried out, as was re-pointing of the existing stonework. Repairs and decoration of the windows and external doors were undertaken as well as part of the scheme.

Cages, originally located on the bottom of the building providing a secure access to the basement, have been removed thanks to the upgrade of the existing security system.

The building remained open during the works throughout the project; Apsley House usually closes down on week days during the winter periods but continued to open on weekends which were a challenge for the team.

“The project was undertaken on a restricted site, as the area in front of Apsley House is small and a portion of the house is a private residence so the contractor had to work in a restricted area, using the east of the site as storage space. 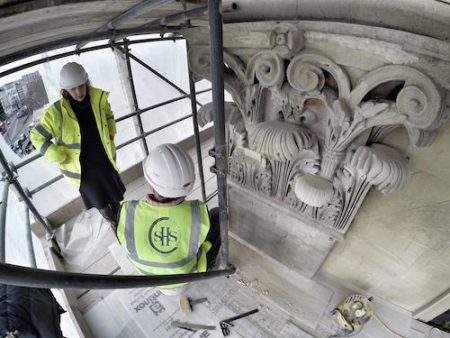 “The work was mostly undertaken at an elevated level which was challenging as was developing the scaffold for access to the elevation because the building is Grade I Listed which meant we couldn’t fix any scaffolding onto the face of the building. We had to be really careful where the scaffold was bearing onto especially with regards to a large portico located on the building; with this in mind we had to cantilever the scaffolding underneath that and so where the scaffold could rest was restricted throughout the project.”

Michael explained that undertaking highly skilled conservation works in a restricted environment was extremely challenging for the team, but the expertise of the contractors was paramount in getting the difficult job completed efficiently.

The site is situated in a prominent site on the corner of Hyde Park and so the team were always alert to ensure the public were safe at all times. Another challenging aspect of the project was the monitoring of large mirrors within the building which form part of Apsley House’s internal decorative scheme.

Sensors were fitted to the mirrors to ensure that when the team were in the process of removing the external stonework the vibrations did not crack the mirrors.

The project has now been completed.