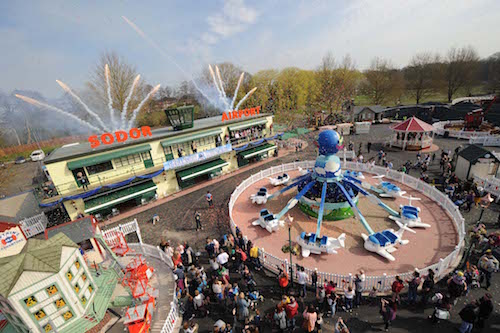 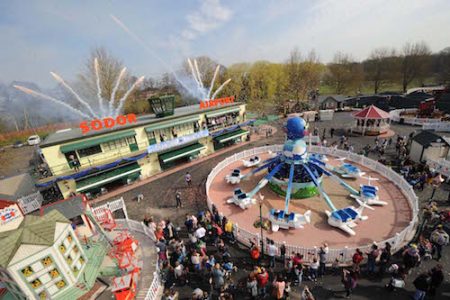 Following a huge £2.5 m expansion, Drayton Manor Theme Park’s Thomas Land™ attraction is now 40 per cent bigger and is attracting more visitors than ever before, with a host of new rides and features.

Thomas Land is based on the Thomas The Tank Engine characters created by the Rev W Awdry when he was based at St Nicholas’ Church, Kings Norton, Birmingham, where he lived until 1946.

Thomas Land originally opened at Drayton Manor Theme Park near Tamworth in March 2008, with the new expansion being opened at Easter this year.

Main Contractors for the project were DF Beniston Limited, who constructed the park’s original Thomas Land attraction and have carried out numerous projects at the park over the last 36 years. 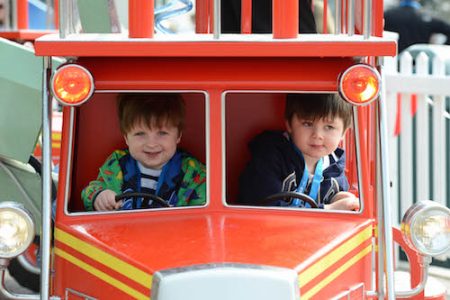 Opening of the Thomas Land Expansion at Drayton Manor Theme Park. From left is Caelan McCourt, 3, and Etienne Ouillon, 3, from Coventry.

There is also Flynn the Fire Engine, equipped with on-board hoses so riders can help to put any fires out!

Captain’s Sea Adventure introduces six rotating Captain Lifeboat carriages, all complete with their own cannon to squirt water. Toby the steam tram who wobbles, spins and turns has also arrived with the new Toby’s Tram Express.

In addition to the new rides, there is also a fountain and three Victorian fairground games, plus a bandstand for live performances. 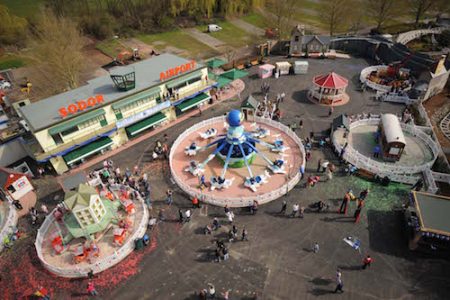 Neil Beniston, managing director of DF Beniston Limited said: “Everything we constructed including all the buildings and themes had to be two thirds of the normal size, and needed to look very much like Thomas Land in the television series.”

He added that they created many of the new features working only from artist’s impressions.

One of the themes they constructed was a docklands area incorporating different buildings, including some with balconies, and all made in timber and plywood. This includes 4 or 5 buildings and is complete with sound effects. All of the new buildings have been designed to blend with the original ones, to give a seamless appearance.

Another new element is the rock quarry feature for the Blue Mountain attraction. This is quite large – around 30 metres across by 4 or 5 metres high and also includes ‘old’ buildings and other features to give the appearance of an abandoned quarry.

The Jeremy Jets ride is a roundabout, with jet cars that go up and down, with this movement being operated by the rider.

The Toby’s Tram Express new ride has also proved popular, since it spins and rocks 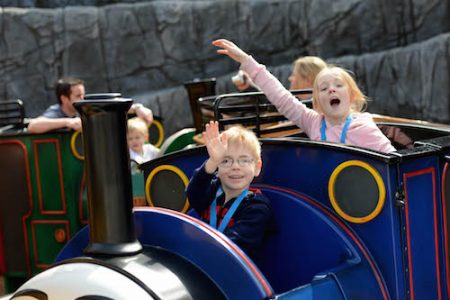 Opening of the Thomas Land Expansion at Drayton Manor Theme Park. From left is Maxwell Booker, 4, and Maisie Booker, 8, from Long Eaton.

In addition, a new railway station was also constructed for Thomas, as well as a water feature and a statue.

“Another new element is a toilet block which is themed to look like two old fishermen’s sheds from the outside and has a very nice interior,” said Neil Beniston.

“Over the airport building, we have created five rooms, with various themes including docklands, a quarry, aeroplanes and trains, which are quite effective and are available for hire. The interior design and theming works were carried out by a local company, D J Pope Creative.

“The project involved six or seven months of intensive work, because many of the rides have extensive concrete bases – some as big as 20 metres of concrete, so groundworks were a significant part of the scheme.

“Over years of working at Thomas Land we have developed our own techniques for creating scenery which looks both realistic and as if it has been there for a long time. Although this is often made only in plywood, studding and render, it gives the illusion of being much more substantial.

“The project went very well and completed on time and appears very popular with visitors,” he concluded.