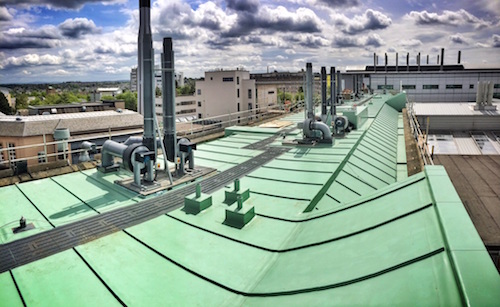 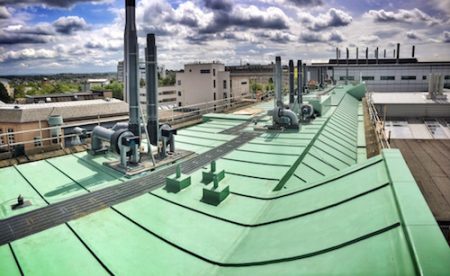 Winner of the Single Ply Roofing category at this year’s NFRC National Roofing Awards, the roof refurbishment of the Joseph Black Building was an extraordinary project completed by BriggsAmasco using a Sika Sarnafil membrane.

The Joseph Black Building, found in the King’s Buildings Campus at the University of Edinburgh, houses the School of Chemistry. As its roof had come to the end of its natural life, Summers-Inman Construction & Property Consultants were appointed by The University of Edinburgh to survey the existing roof, provide solutions for replacement and procure the works.

On behalf of the university’s estates department the project was managed by Summers Inman. The initial scope of the works covered a multitude of trades, the most complex of which was stripping more than 2000sq m of the existing copper roof coverings. As part of Sika Sarnafil’s flagship refurbishment offer, its dedicated surveyors conducted a comprehensive roof survey to determine which system was suitable for the roof. This included gutters, slopes, an outhouse and dormer roofs that presented new problems to overcome daily.

Sika Sarnafil Membrane S327-15EL in Patina Green was chosen to replace the old roof covering, as the local authority planning department advised that this product was an acceptable replacement for the original copper roofs on the listed building. Listed Building Consent was obtained by Summers Inman. Work to replace the roof included installing a new timber taper fall once the copper roof was lifted, to improve drainage, which was then covered with the mechanically fastened Sika Sarnafil system. The membrane was applied with standing seam profiles to replicate the original copper roof details.

The building is home to many research and teaching laboratories for students and staff from all over the world studying and working within. This presented a further challenge, as it was stipulated that the building must remain operational throughout the works. BriggsAmasco had to effectively manage the project and make sure it was completed quickly and with minimal disturbance.

Raymond Wright, Glasgow Branch Manager, BriggsAmasco, explained: “Due to the time constraints, we had to work smart. As the main contractor we could apply the pressure to quickly develop, fabricate, install and weather details, as the stripping of the cooper roof progressed. Starting this work would be challenging at any time, but the commencement date was 6 January 2014 and conditions were certainly tough.”

BriggsAmasco also had to integrate the new bespoke Sika Sarnafil outlets with existing lead and cast iron drainage system, working closely with Sarnafil Plus, Summers-Inman and the client to ensure the detailing was correct, approved and was in keeping with the heritage of the building.

“The integration of other trades and materials were all managed by us, including slate, lead and Sika Sarnafil products, working together as one,” adds Raymond.

“With the ability to fully coordinate, design and install the roof came greater control and led to a quicker completion of the project, along with increasing the client’s confidence in on-site finishes and weathering.

“We were delighted to win such a prestigious contract from the University of Edinburgh and proud to work alongside Sika Sarnafil to produce such a high quality end result.”

The job was finished within budget and with minimum disruption to working labs below. A thorough final inspection as part of the Sarnafil Plus package saw the roof receive a 20-year single point guarantee. This ensures that the client is protected against unlikely problems with the membrane caused by incorrect design, defective materials, or poor workmanship.

Flawless application of the Sika Sarnafil membrane across an area with complex detailing and upstands sealed the victory for BriggsAmasco at the tenth NFRC Roofing Awards. The project was recognised by the judging panel for the challenges that were overcome during the project and the wholly positive response from the client.

George Boag, buildings and operations manager, University of Edinburgh, said: “We were impressed with the outstanding workmanship, as well as the aesthetic qualities of the roof, delivered by BriggsAmasco and Sika Sarnafil. All parties worked as a team and delivered great results, which were in keeping with the building’s heritage and we’re confident will last for years to come.”