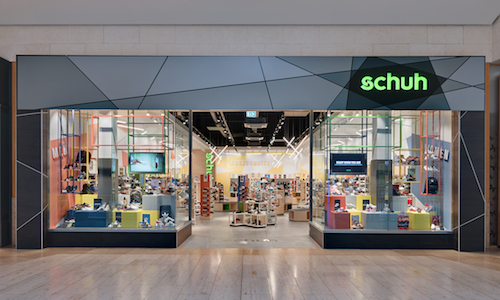 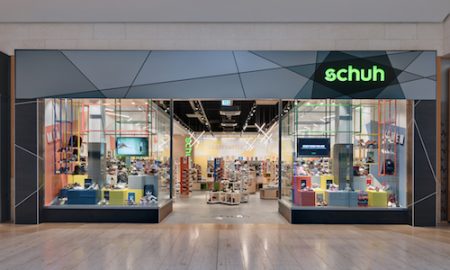 A new interior retail concept for footwear retailer schuh was launched earlier this year at the company’s highly popular Bluewater store, and is now being rolled out across the brand’s new sites.

The new concept known as ‘schuh twentyFIFTEEN,’ was created by MRA Architecture, with Kiwi Design as main contractors.

MRA was invited to create a new physical retail space that communicates schuh’s values of innovation, service and convenience.

“It’s a business with a very open and inclusive vision, great product choice and wide customer appeal, supported at all levels by a highly motivated and knowledgeable workforce. 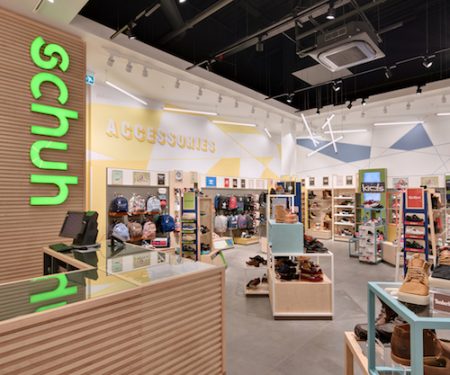 “We looked at brand communications to see how schuh already represents itself through PR campaigns, its website and social media, then took this research and translated it into an interior design that captures the zeitgeist from both an aesthetic and technological point of view; a concept that fully represents the brand in 2015.”

To develop and deepen this approach, MRA looked lo the work of contemporary artists Aakash Nihalani and Will Dorner, who both explore the relationship between public space and people in a way that is witty, uncomplicated, colourful and inclusive.

MRA have developed a shopfit concept based on improved sightlines, simple modular forms, use of bold colour to help organise the customer journey, low-tech construction techniques and sustainable materials. Easy to use, simple to install and good value.

The original interior was completely stripped out and replaced, including the installation of new flooring, new wall systems and new suspended ceilings. 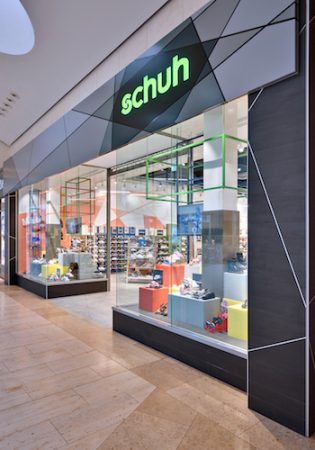 “As schuh stores are fitted out very rapidly, one of the things that we had to do was to design an interior that was very quick to install, so the bespoke modular wall and floor display concept we came up with allows for flexibility in terms of the fact that it is easy to adjust the number and combinations of modules required for different spaces in future fit-outs at other stores,” said Anshu Srivastava.

“So we have around five or six basic modules that can be adapted to suit any particular store layout – for example in older buildings where interiors can be more irregularly shaped. We also achieved an interior with an open and clear view, with sightlines right across the store,” he added.

MRA Design Director Stephanie Srivastava said: “We have been able to reduce the height of midfloor units by making the perimeter system work harder. This increases visibility and helps the customer quickly orientate themselves on entering the store.” 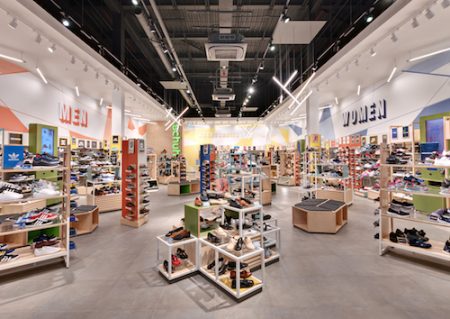 The midfloor units particularly bring the concept of lightweight and modular construction to life, Stephanie Srivastava continues: “The very essence of the construction creates forms which are low and three-dimensional, but this means that the display units are shoppable from all sides and, allied to our new LED lighting design, allow the customer to more easily see, reach and pick up a particular style.”

Anshu Srivastava added: “We also wanted to create a design concept that reflects how streamlined the schuh product to customer process is – for example the customer can choose the style they want and then scan it in one of the in-store digital kiosks and the system will then display the price, as well as the available colours and sizes in the store that they are in, and nearby schuh stores.”

New LED lighting was also installed to a design dramatically spotlighting the product to maximum effect, and complemented by new signage, including the store’s new starburst logo, also designed by MRA Designers. The logo was also used to enhance wayfinding by appearing on high level wallpaper graphics that wrap around the entire store to identify product zones. 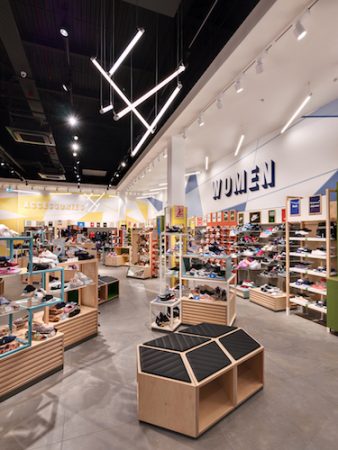 The project was completed in late March, with a further new concept schuh store having since been completed at Monk’s Cross shopping centre in York. A third new look store is now on site at Newport and a number of others are on the drawing board.

“The new concept was very well received as it was very true to what schuh had asked us to do at the outset,” said Anshu Srivastava.

“This is an important project for us as a practice, as schuh is a major retailer. The collaboration with schuh on this project has been a fantastic experience that has resulted in a store environment which successfully captures the innovative and customer orientated values for which the client is justly renowned.”